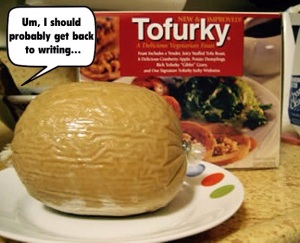 Because everyone is busy finishing their own novel this month. Who has time to read about writing tips when they have 20,000 words remaining in their 50,000-word manuscript and a 30-lb. Thanksgiving turkey already thawing in the sink? Not to mention that, in less than two weeks, many NaNoWriMo participants will be following up their day of giving “thanks” by attacking fellow shoppers on Black Friday for the last pair of “The Walking Dead” slippers. What if their fingers get broken during a tussle at Target? Or they get walloped at Walmart? Mauled at Macy’s? Shanked at Sears? Body slammed at Bloomingdales?

Or more importantly, will there be a ghost writer available to finish their manuscript in before Nov.30?!?

Even for writers who have no plan to venture out from their bunker during the Black Friday shopping, there’s still the effects of turkey tryptophan to deal with. Those reserves will be coursing through their veins and can cause drowsiness for as many as three days. And that’s even if they aren’t watching bowling on TV!

But we’re having Tofurky, so I won’t have to worry about getting sleepy.

That may be true. And for which I am very sorry. But keep in mind you can only spend so much time writing while on the commode.

So what does all of this mean?

It means that NaNoWriMo writers willsoon be approaching the home stretch — and like any race worth running, it seems toughest right before the finish line. That’s when your legs feel like they have small children attached. And who knows? That may actually be true in some cases, especially if you write from home between laundry loads. Whatever the case, on behalf of those of us who AREN’T participating in NaNoWriMo (It’s official; we took a vote), we’d just like to offer our support and cheer everyone on during the final leg.

Be proud. Pat yourself on the back. Reflect on your achievement.

Not NOW! There’s no time!

But the fact that you’ve made it this far is proof that no amount of tryptophan, an exploding turkey or even Black Friday is going to keep you from clearing the final hurdle by midnight Nov.30.

Just watch out and try not to step in the Tofurky.

(Ned Hickson is a syndicated columnist with News Media Corporation and a member of the writing team at Long Awkward Pause. This has been an excerpt from his upcoming book, Ned’s Nickel’s Worth on Writing: Pearls of Writing Wisdom from 16 Shucking Years as a Columnist. His first book, Humor at the Speed of Life, is available from Port Hole Publications, Amazon.com or Barnes & Noble.)