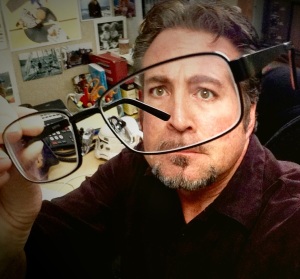 It all started a few weeks ago when my wife and I were watching a Japanese movie with subtitles. Being  that I’m the only one in the family who doesn’t wear glasses, I gladly explained to her that Lord Yushido had demanded, “A ferret army be dropped by helicopter upon my enima lesions!”

I’m no expert on early 1700s Japanese history, but I’m pretty sure Shoguns didn’t travel by helicopter. And the rest of that statement… I don’t even want to think about.

“When’s the last time you had an eye exam?” my wife asked, pressing pause and donning her glasses. “And by the way, it says, ‘A fierce army be delivered on horseback to break my enemy’s legions.'”

“Yeah, that makes more sense,” I said, and admitted I hadn’t had an eye exam since middle school. Did I mention I’ll be 50 in a few months? I’ve always prided myself on still having a full head of hair, being in relatively good shape and not needing glasses.

Thanks to Lord Yushido and his lesions, it seemed I might have to settle for two-out-of-three. As we arrived at the optometrist’s office the following weekend, I was still hopeful my eyes had just been tired lately. Or that I’d merely had a minor stroke.

We have teenagers at home, so it was possible.

“Can you read the first line for me, Mr. Hickson?”

“Mr. Hickson, there aren’t any numbers on this chart.”

As it turns out, after 16 years of staring at computer screens in the newsroom, my eyes need a little help when it comes to seeing more than 20 feet away. Can I drive without my glasses? Sure. Will I possibly miss my exit on “Poplar Street” because I thought it said “Panda Spanker?”

While I don’t need glasses to function, there’s no arguing that wearing them allows me to see certain things more clearly. This bothered me at first. While it’s true I have some grey in my hair and beard that wasn’t there a few years ago — coincidentally around the time our kids became teenagers — I saw the need for glasses as the first real sign of aging. Was this the initial step toward turning in my rocker Tees for a rocking chair? Would I soon be eating dinner at 3 p.m. How long until I didn’t care about ear hair? Or basic driving rules?

I spent a few days in a slight funk until I realized something important: I’ve demanded a lot from my eyes over the years.

As a writer staring at words all day, every day.

As a photographer composing images and judging light conditions for more than 20 years.

As a chef for 10 years finely slicing and chopping everything but my fingers. Usually.

And as a firefighter for the last five years, searching for potential dangers in order to remain situationally aware.

After nearly 50 years, my eyes have earned the right to ask for a little help.

The other night, I was in the kitchen cooking when I looked to see my wife sitting at the diningroom table, reading something that made her laugh. I reached for my glasses and slid them on, watching her come into perfect focus. Though I could see her pretty well from the counter without my glasses, with a little extra help I could make out every  detail of her smile. The curve of her face. The way her cheeks rise the bigger she smiles. The way her nose crinkles when it’s something a little naughty.

I could get used to this, I thought.

Now, if I could just unsee Lord Yushido’s enima lesions…