For a few fleeting moments this weekend, I considered re-joining our local community softball team. Then I remembered what happened the last time I played a few years ago, and the trauma it caused. As they say, some wounds never heal.

Especially if you forget to wear an athletic cup. 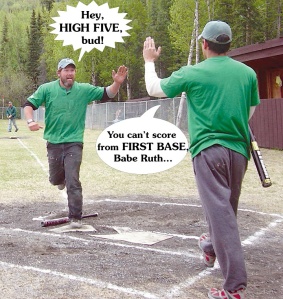 As I recently mentioned, I joined a men’s softball team after not participating in anything athletic since (conservative estimate) the golden era of dodgeball in the early ‘70s. In response, I have received letters and emails from readers offering encouragement, support and, in an isolated incident, a lucky athletic cup from someone named “Derek.”

Admittedly, I was curious as to what qualified this particular cup as “lucky.” His response should be a lesson to us all regarding the dangers of continuous baseball usage.

“I used to get hit — there — almost every game,” Derek explained in a note. “Sometimes two or three times. But my [censored] never got hurt.”

Though he didn’t mention it, I suspect Derek also has a “lucky” batting helmet.

Regardless, many of you have expressed an interest in knowing how the season is going, whether I’ve had a hit yet, if jock itch has been an issue, and how much time I’m spending in right field. I think Patsy Sullivan from DeSoto, Texas, summed it up best when she asked:

Have you quit yet?

As I told Patsy, I’m not a quitter. In fact, I expressed this to my teammates during a recent huddle, when we found ourselves down by two runs heading into our last at bat, which inspired me to throw my hand out and chant, “I WON’T QUIT YOU!”

After an uncomfortable moment in which all 13 of my teammates guzzled beer simultaneously, we decided to stick with “RUNS!” as our chant. Afterward, we also decided I would be required to submit all chants on paper before any team huddles.

Craig Pearson of Lake Powell, Ariz., wanted to know how we’re doing in the league standings. Currently, we are 3-3 after losing to our local radio station’s team. I should mention that KCST is undefeated, thanks to a hard-hitting line-up, ironclad defense and a team of players committed to avoiding any mistakes that could send them back to Cuba. To our credit, we did manage to keep things close — at least until KCST’s timely clutch hitting sparked a 12-run rally late in the bottom of the first inning.

Until then, it was pretty much anybody’s game.

Nancy Smythe of Atlanta, Ga., asked how I’d rate my personal performance so far this season. I can answer that question in two words that, coincidentally, just happen to be my official softball nickname:

That’s right. When our team is tired of running bases during a two-out rally, I’m the man they turn to. In our last game, the outfielders actually left on a beer run when I came to bat. I’m happy to say I made them regret that decision by connecting on a line drive that knocked over their beverage cooler.

To answer a question from Pete Schuster of Cleveland, Tenn.: We’re not the best team; we’re not the worst team. However, I’m pretty sure we’re the only team with a certified horticulturalist in the line-up.

This is very helpful because, in addition to being a good ballplayer, this individual also knows that chopped beach grass, distributed evenly within a beverage, can cause a person’s throat to swell shut for as long as three to four inn…

I mean approximately an hour.

Hey, he only mentioned this so we could recognize the symptoms; just in case one or more of our opponents suddenly drop to the infield clutching their throats; possibly even during the play-offs. Until then, I’ll keep standing in right field with my glove held high. Who knows?

(Ned is a syndicated columnist for News Media Corporation. You can write to him at nedhickson@icloud.com, or at Siuslaw News, P.O. Box 10, Florence, Ore., 97439)

31 thoughts on “Answering your painful questions about my softball season”