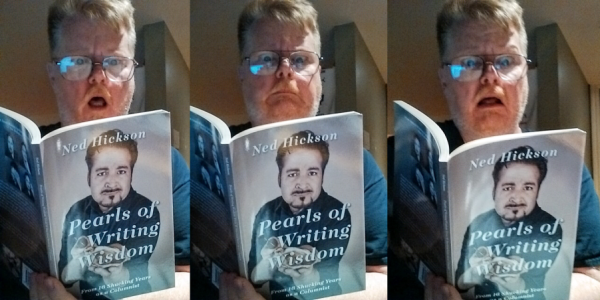 Canadian humorist and screenwriter Randall Willis reacts to my “Pearls of Writing Wisdom.” Possibly after eating too much poutine…

When I saw the notification on Twitter that Randall Willis had posted a review of my new book, it was the first time in a while that I’d felt nervous about my writing. Not so much because he’s Canadian. Or because he’s a hilarious, award-winning writer and screenwriter. And not even because he knows a lot of guys who play professional hockey and carries a hockey stick in the trunk of his car “just for emergencies.”

Unlike my first book, Humor at the Speed of Life, which was a collection of newspaper columns I’d published over the last 16 years, Pearls of Writing Wisdom: From 16 shucking years as a columnist is more personal because it’s written for writers. Seeing my book in the hands of other writers I know and admire made me nervous in the same way I’d imagine it must feel to host The Oscars; standing in front of an audience of talented peers and hoping to be worthy of their time and attention. Except in this case there’s not even an open bar to loosen things up first.

At least I don’t have Stephen King staring me down from the audience.

But when I saw Randall’s photos, I wasn’t sure if:

1) He was disappointed or

2) He was reading on the commode.

Then I read the first line:

“In many ways, the book is a writer’s version of that dreaded conversation between a child and loving parent/teacher about sex…and it’s just as awkward.”

I kept reading, in the same way you keep watching the Presidential debates even though you’re pretty sure it’s only going to get worse. Fortunately, while I was right about the debates, I was wrong about Randall…

“In his own nervously jovial way, Ned tries to encourage writers to explore their budding bodies of work and yet caution them about the challenges that lie ahead without scaring (or scarring) them into creative celibacy…”

Randall goes on to utilize the sex-talk analogy throughout his funny, thoughtful review, which I realize is about as close as I’ll ever come to being called an amazing lover.

I’m OK with that.

If I can stand in front of you and feel my tips, insights and inspirations are worthy of your attention, I couldn’t ask for anything more…

“…I found a book that covered all aspects of writing, from understanding the inherent urges and the mechanics of satisfying wordplay, to dealing with the social and legal ramifications of your actions… hunh, this really is about sex.”

For the full, hilarious review, I hope you’ll visit Randall at Created By RCW.

I also want to thank him for the wonderful review, and for getting it up (the review) so quickly…