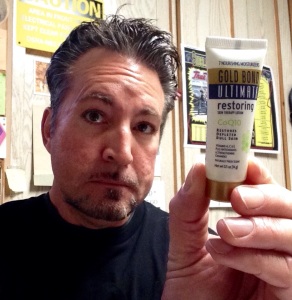 Welcome to a free, unsolicited (perhaps even unwanted) excerpt from my latest book, “Pearls of Writing Wisdom: From 16 shucking years as a columnist,” a book Publishers Monthly has called, “The last word in writing advice. Or so we hope.” And what 50 Shades author E.L. James has refered to as “The inspiration for most of my safe words.”

This excerpt was originally inspired by a good blogging friend who, like many of my friends, has asked to remain anonymous. So we’ll just call her Michelle, a talented writer who emailed me after experiencing her first truly negative response to something she posted.

The reader in question was somewhat offended by what was essentilly a lighthearted post about accidentally being seen naked by a stranger. I felt Michelle’s approach was tasteful and humorous. Regardless, the reader’s response caught her off guard and caused her to momentarily question her judgement as a writer — something that readers of this blog question each day.

Anyone who puts words down with the intention of others reading them shares a part of themselves they hope others will either enjoy or identify with. When someone is offended, it almost feels like a sucker punch. If you follow me on Facebook, you know I once received this note from a reader earlier this week: 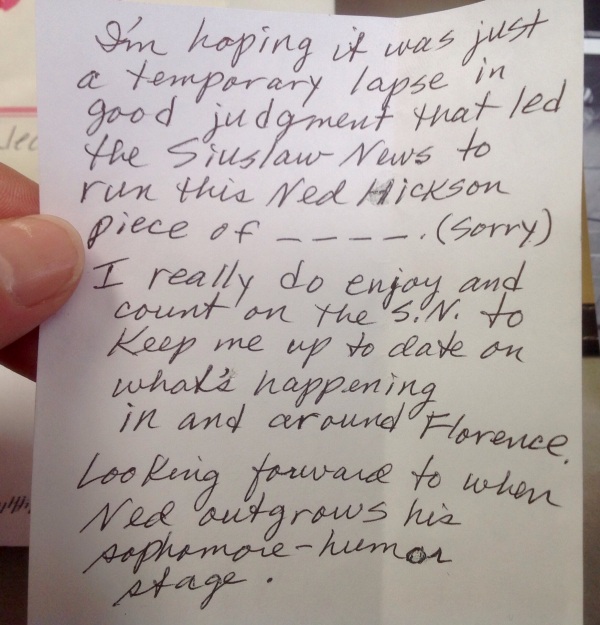 The column was called For the Person Who Has Everything, Including Flatulence, and was about new underwear that offers a built-in flatulence filter. Considering the people I work with, I thought of this column more as a public service announcement. The reader, however, was clearly offended and “…can’t wait until Ned grows out of his sophomoric-humor stage.”

As I told Michelle, I learned a long time ago the only thing you can do when something you’ve written offends someone is to trade that sucker punch for a gut check by asking yourself a simple question:

Did I write this with the intention of being offensive?

If the answer is “No” and you have remained true to your own voice, then you can stand behind what you have written. If the answer is “Yes,” then you need to evaluate the direction you’ve taken and determine if it’s one you are comfortable with.

There is no “wrong” answer, only whether it’s right for you.

Admittedly, I picked on fruitcake a little.

“…Recent studies show that mild depression after the holidays is not only common but, in many cases, the result of FDAD — Fruitcake Disposal Anxiety Disorder. On one hand, your fruitcake was a gift and therefore deserving of some measure of appreciation. On the other hand, it has already become a chew toy for the neighbor’s pit bull. This often leads to feelings of anxiety long after the holidays. So as a service to our readers, we are offering the following self-help guide: I’m OK—You’re OK. But Give Me a Fruitcake and I’ll Kill You…”

Some people thought so.

Fine, a lot of people. In fact, in my 16 years as a columnist, I received more emails and letters (Yes, actual handwritten words on parchment and mailed) about this column than any other. There was no denying I had struck a nerve with a part of my readership that was potentially still intoxicated with rum. 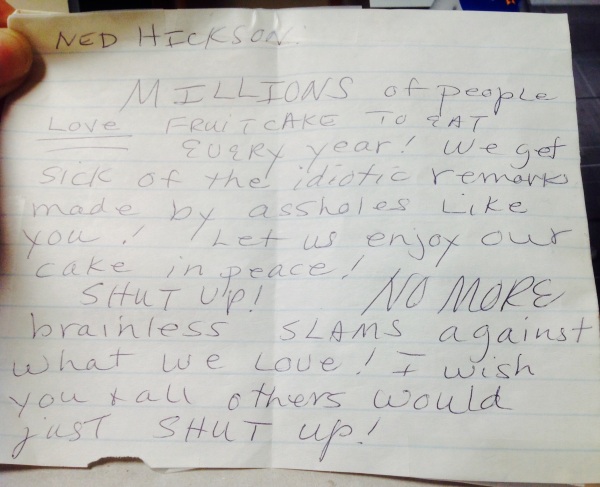 How did I respond?

I hung it on my wall, where it serves a daily reminder of how, as a humor columnist, I have an obligation to avoid Boca Raton, Fla.

Actually, Gaylesville, Ala., isn’t on my short list of vacation destinations either, thanks to an email I received regarding this column: Called for jury duty? Don’t forget your tinfoil hat.

In it, I talked about how frivolous lawsuits are souring people on the judicial process and undermining the importance of jury duty. The following excerpt apparently angered one Alabama woman to the point she hopes to be a jurist when I’m on trial. I’m currently checking to make sure I don’t have any warrents pending in Alabama…

“…I once found myself driving down the road with an 800-degree onion ring searing my flesh. I had just left a Carl’s Jr. drive-through and, after maintaining my composure long enough to exit the parking lot, pounced on my combo meal like a hyena at a gazelle feed — laughing and eating, laughing and eating. So, when I ripped into an enormous onion ring and felt the breading fall away into my lap, I had no one but myself to blame when my appetizer became a sizzling, onion-flavored chin strap that turned my frenzied laughing to screaming on I-5. In spite of this, I never once thought of calling a lawyer in an effort to seek damages against Carl’s Jr. and the Onion Growers of America for supplying me the means with which to be an idiot…”

Here’s the response from Alabama:

“Regarding Ned Hickson’s column about jury duty, I wonder if he would think a lawsuit against him for seriously injuring or killing someone because he was eating and driving would be frivolous? The least of his problems would be a burned chin from a hot onion ring. I, for one, would LOVE to sit on that jury. He should be ashamed of his blatant disregard for others who have to share the road with him as he has his lunch.”

One of the most rewarding things about being a writer is connecting with people. Even when it seems they’ve reached you from beyond a dead zone. Elated or enraged, it means a reader felt it was important enough to take time from their busy life (not counting letters from inmates) to let you know how they feel about what you wrote.

Isn’t that what it’s all about?

While it’s important to develop a thick skin as a writer, you can’t allow it to become hardened to the point you stop listening.

Listening to and appreciating feedback — good or bad — can mean the difference between building a readership and losing one; building credibility among publishers or tearing it down; growing as a writer or becoming stagnant; .

You get the point.

As I told Michelle, not everthing you write is going to be everyone’s cup of tea.

Some of us prefer coffee.

“Hey Mister: Yer humor has me laughfing [sic] way down in Cedar Bluff, Alabama. Drive truck for paycheck and drop off The Post all over S.E. states. Thanks for keepin’ me smiling.”
— ‘Stretch’