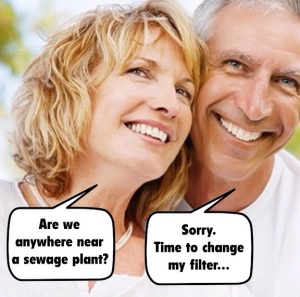 According to the Under-Tec Corporation in Pueblo, Colo., every day there are millions of people around the world who find themselves trapped in elevators, small cars and copy rooms with people who are unable to meet gas emission standards. This condition, known in medical terms as malodorous flatus (a Latin term meaning “The dog did it”) has been a major focus for Under-Tec, an undergarment development company that, according to its website, was the first to introduce “A new generation of protective underwear for flatulence” called Under-Ease.

Why do I bring this up?

Being a journalist, I sometimes rely on “sources” to provide me with “tips” for “breaking” news. These tips come in may forms, including anonymous voicemails, notes left on my windshield or, like this morning, a newspaper clipping taped to my monitor with the words:

You should look into this. I mean it.
— Your Editor

So as you can see, I really had no choice.

After doing some research, I discovered the technology behind Under-Ease appears to be effective and simple. The underwear itself is made from a soft, air-tight nylon fabric with elastic around each leg and an “exit hole” (their term, not mine) cut from the back (good planning) that houses a special multi-layered filter.

This “exit hole” is important for two reasons.

First, it forces the gas to be expelled through the filter. Second, and perhaps more importantly, without the hole, the air-tight underwear would fill up like a hot air balloon, eventually releasing the trapped gasses in one enormous burst (or fireball, depending on one’s proximity to a lighted match or woodstove.)

The core to this new technology is the specially designed, multi-layered filter that covers the exit. Without this filter, let’s face it: All you’d have is just another leaf blower.

What makes the filter so effective is its unique blend of Australian sheep’s wool, polypropylene, spun glass and recycled car air-fresheners, all of which surround a single layer of activated carbon. All of this is sandwiched together into a “micro-thin” filter (roughly the size of an iPad Mini) that can be worn under regular trousers or dresses without detection.

It’s important to note that the company discourages wearing the garment while bathing, swimming, soaking in hot tubs or during any other water-related activities. The reason is because of the filter’s powerful absorbency, which is roughly equal to dumping 60 cases of Brawny paper towels into an inflatable pool — a situation that could actually prove more embarrassing than a few well-timed bubbles during a game of water volleyball.

Each pair of Under-Ease is guaranteed to last six months to a year. That sounds reasonable, at least until you read the fine print, which includes the statement “under ordinary conditions.”

I called the company to get a more detailed explanation as to what “ordinary conditions” were.

In the interest of time, let me just say if you attend All-You-Can-Eat Burrito Night at your favorite Mexican restaurant, don’t bother asking for a refund on your Under-Ease. Also, keep in mind that the effectiveness of Under-Ease undergarments will be “greatly diminished” should you somehow “puncture, rip or tear them.”

In which case, flatulence is probably the least of your problems.

With the holiday shopping season underway, Under-Ease could be that special gift that lets the person who has everything know you care.

Not to mention everyone around them.

66 thoughts on “A gift for the person who has everything, including flatulence”