Twenty-one years ago today it was Friday the 13th. The reason I know this isn’t because I’m a savant, but because it was the day my oldest daughter was born — and everything seemed to be going wrong. The monitors were glitching, causing her vitals to disappear and the nurses’ faces to tighten into a fixed expression of forced calm. When I asked if things were ok, I was met with tight-lipped smiles of reassurance that made my stomach queasy. She wasn’t positioned right, with one arm extended above her head, as if caught in the middle of a backstroke swimming out of the womb. Eventually, her clavicle had to be broken in order to deliver her into the world.

When I held her for the first time and watched her tiny fingers wrapped around mine, I looked into her big brown eyes and saw an old soul looking back at me. It was a look that said, “I’ll make this as easy as I can for you, and I’ll forgive you when you screw up. Because we both know you will from time to time.”  END_OF_DOCUMENT_TOKEN_TO_BE_REPLACED

Unless your baby looks like this, it could be a slacker…

Parents used to be satisfied with sonogram images of their child developing in the womb, even though, for all we knew, we were actually watching video footage of a school of mackerel on a depth finder.

“And if you look closely, you can see your baby … right … about … whoops! It’s gone. Something must’ve scared it.”

The doctor would then print copies of these images, which we carried in our wallets to share with family, friends, and anyone unfortunate enough to make brief eye contact. At the end of nine months, the only real expectation any of us had for our child was that they come out headfirst. Laughably, we actually felt it was enough for them to grow from a microscopic egg into a full-fledged human child within nine months.

Those babies, of course, were total slackers. END_OF_DOCUMENT_TOKEN_TO_BE_REPLACED 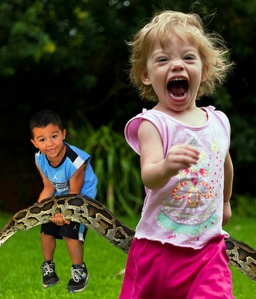 Today, I’m writing to you from a locked treatment facility for the emotionally disturbed. Being a parent, it’s not like I didn’t know what to expect.

And, if all else failed, I came with a bungee cord large enough to wrap all eight of them together in the middle of the lawn. END_OF_DOCUMENT_TOKEN_TO_BE_REPLACED

Today, I’m writing to you from a locked treatment facility for the emotionally disturbed.

Being a parent, it’s not like I didn’t know what to expect.

And, if all else failed, I came with a bungee cord large enough to wrap all eight of them together in the middle of the lawn. END_OF_DOCUMENT_TOKEN_TO_BE_REPLACED

(Note: Judging from the response to last week’s launch of “Flashback Sundays,” I think we’re on to something! Or at least many of you were on something at the time. In either case, with spring break on the way, here’s another post from the early archives, back when I thought “Freshly Pressed” was the tagline for a fashion blogger…)

We live less than 15 minutes from our favorite lake. The problem is, it also happens to be everyone else’s favorite lake, which means in order to get a spot within the vicinity of actual water, you have to be there when the gates open at noon and participate in something similar to the Oklahoma Land Rush. It’s not uncommon to see small children strapped to inflatable toys and tossed ahead of the crowd in order to claim prime territory.

As a parent, it’s not a gamble I’m willing to take with my child. Especially since, as a general rule, it only counts if your child is in an upright position once they skid to a stop.

The good news is that once the initial pandemonium is over, things generally settle into a state of peaceful co-existence as, one by one, parents begin passing out while blowing up inflatable toys. Sadly, the evolutionary process has not been able to keep up with the growing demand for larger and larger inflatable animals. Unless you are a pearl diver by trade, chances are your lung capacity is nowhere near what it needs to be in order to fully inflate your child’s favorite water toy. END_OF_DOCUMENT_TOKEN_TO_BE_REPLACED

Few things can make you look stupid faster than being outsmarted by a public urinal. Especially when it occurs in front of your four-year-old son to whom you are trying to impart rudimentary public rest room etiquette.

I don’t know if potty training is a seasonal thing, like the migration of geese or fluxuating interest in the Kardashians, but I’ve noticed a lot of people talking about potty training their children lately. Apparently, there was a lot more dancing around the May pole nine moths ago than I knew about. Regardless, all this talk about Fruitloops in the toilet got me thinking about my son graduating to the use of a public urinal eight years ago.

We had no problem with the initial stages of our educational process, which began with the proper entrance, i.e., avoid all eye contact and enter the rest room as if you had called ahead and reserved a specific commode. If one isn’t open, go directly to the nearest sink and wash your hands until something becomes available. The trick, of course, is to avoid washing you hands for so long that you appear to have severe obsessive-compulsive disorder. END_OF_DOCUMENT_TOKEN_TO_BE_REPLACED

Teaching a child to bowl is truly a bonding experience. And by that I mean you should really consider taking out a bond before entering the bowling alley.

As someone who escaped the experience of teaching his five-year-old nephew to bowl with only a minor skull fracture and minimal orthodontic surgery, I feel I’ve acquired a level of expertise that could be helpful. Let’s begin with shoes. Changing into your bowling shoes while in the carpeted area will give you a false sense of security, making you less prepared for the realization that walking in tractionless shoes on a highly-waxed surface is a lot like strapping soap bars to your feet and trying to cross a wet mirror.

Ironically, children have the natural ability to perform double axels over the same surface. Which isn’t to say that you won’t; it’s just that theirs will be on purpose. END_OF_DOCUMENT_TOKEN_TO_BE_REPLACED