Yesterday afternoon it became official! Any typos that I, my publisher or book editor may have missed are now on their way to the printers, where they will live forever in black and white to haunt me at book festivals, workshops and conventions.

“Hey Mr. Hickson! Will you sign my book on page 50, right above where it says ‘If you want to be a writer, you can never give up dope?'”

All joking aside, after reading through it for the final time before signing off on it for my publisher, I pushed the “send” button feeling truly excited to share this book. While my weekly columns and blog posts are certainly an extension of me, this book is even more personal because it’s an opportunity to take what I’ve learned over the last 16 years and share it directly with other writers (as opposed to just sitting in a bar and mumbling to whoever’s next to me).  END_OF_DOCUMENT_TOKEN_TO_BE_REPLACED

As some of you may know (and by “some” of you, I mean my publisher) I’ve been working on my manuscript, Pearls of Writing Wisdom: From 16 shucking years as a columnist, for the last few weeks.

I am now on the final chapter, which will be done tomorrow, depending on what time of day I decide to start drinking.

Anyway, this book is particularly special to me because, if you are a writer (or fear you might be one), I wrote this book for you. Think of it as the conversation we’d have about writing if we were sharing a cold beer. We’d talk about technique, style, personal experience and hopes. We’d encourage each other and share a few laughs. We might even get a little rowdy and start using air quotation marks.

In the end, we’d feel inspired about our love of writing.  END_OF_DOCUMENT_TOKEN_TO_BE_REPLACED

As many of you know (meaning literally dozens), after harrassing you every Friday for two years with my writing tips, I put Ned’s Nickel’s Worth on Writing on hiatus while turning that series into a book: Pearls of Writing Wisdom From 16 Shucking Years as a Columnist.

Set for release this August (no, really), it’s a writer’s survival guide that Editor’s Weekly is already heralding as, “A handbook for writers as inspiring as a life-skills pep talk from Dr. Jack Kavorkian…”

And what Master of Horror® Stephen King has touted as “An essential part of every writer’s tool kit, unless they know a good mechanic.”

The reason I bring this up is because, yesterday, the first of 12 video vignettes from my book was released at Gliterary Girl Media and Port Hole Publications. Thanks to Hollywood director J.J. Abrams and special effects wizards from Industrial Lights and Magic, the imagery and storytelling are truly spectacular! And by that, I mean in the latest Star Wars movie. Neither J.J. Abrams or ILM had anything to do with my video.

Then again, neither does Jar-Jar Binks. So, technically speaking, our movies do have something in common when it comes to production value.  END_OF_DOCUMENT_TOKEN_TO_BE_REPLACED 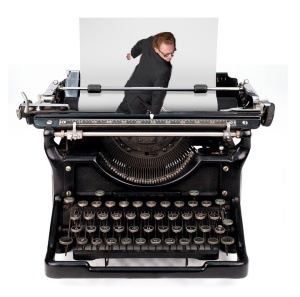 Over the years, my wife has gotten used to my (admittedly bad) habit of leaning over and whispering “expendable character” whenever I see someone who I know is going to die. I should clarify I only make these predictions while watching movies, and not, as a general rule, at the grocery store, in hospital waiting rooms or at family reunions. That’s because in movies, these types of characters are easy to spot.

For example, the soldier who pulls out a photo of his “girl back home” while talking with his buddy on patrol — Spoiler Alert: He’s not making it through the next scene alive. And if he mentions he’s proposing to “his girl” after getting discharged tomorrow, chances are he won’t even finish his dinner rations before keeling over from sniper fire or eating expired creamed corn. The same goes for anyone who mentions having a “bad ticker” or who has a nagging cough; anyone who says they’ve stopped wearing a bullet-proof vest or life jacket because “you can’t cheat fate”; and definitely any character who keeps a mouse or baby bird in his shirt pocket. END_OF_DOCUMENT_TOKEN_TO_BE_REPLACED 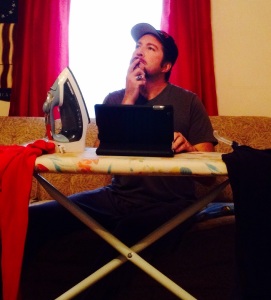 As I scrolled through my Facebook this morning and no less than 10 “hilarious” cat videos that made me appreciate my own cat’s general indifference to everything, I came across a post from talented writer, blogger, wife, mother of three and Sisterwives member Gretchen Weber Kelly. She mentioned how she has come to the realization she can’t write with her kids at home.

Please join me in attempting to appear utterly shocked by this admission.

OK, we can all stop because she’s not buying it.

With summer vacation less than 10 weeks away for many schools… There! THAT’S the face we were looking for!… Gretchen was asking for suggestions, advice, the name of a harmless sleep aid that could induce a three-month hibernation period for her children, or any tips for maintaining her writing momentum through the summer while her kids are at home. Her question made me think of a Nickel’s Worth on Writing post from a while back regarding the importance of establishng a writing routine, no matter what that routine is.

Why did I do this? END_OF_DOCUMENT_TOKEN_TO_BE_REPLACED 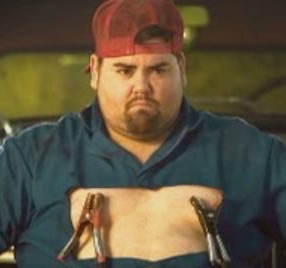 There’s nothing quite like staring at a blank page, knowing that with a few strokes of the keyboard you will transform a landscape devoid of life into a living, breathing thing of your own creation. There’s also nothing quite like finishing that fourth cup of coffee only to find that same blank page staring back at you.

Sure, you may have typed several sentences — or maybe even the same sentence several times — in hopes of gaining some kind of momentum to carry you over that first hump, but the cursor repeatedly stalls out in the same spot, leaving you with the same blank page after riding the “delete” button back to the beginning.

I’ll be honest. I don’t necessarily subscribe to the notion of writer’s “block,” which suggests some kind of blockage — such as a cheese wedge or too many butter biscuits — restricting movement through a hypothetical colon of creativity. Although there are some books in print that offer evidence to support at least part of the colon theory, I prefer to think of the writing process as cells in a battery; when they are fully charged, things start easily. But if the alternator belt slips too much or the terminals get corroded, you end up without enough juice to turn the engine. Because we are writers and not mechanics, and because that last sentence exhausted the full extent of my automotive knowledge, I will sum up my analogy with this: When your battery is low, you get a jump, right?

Writing is no different. END_OF_DOCUMENT_TOKEN_TO_BE_REPLACED

I’m going to open with a simple truth:

Step one to being a writer: Write!

That advice seems pretty straight forward. The kind of obvious straight forwardness that carries you with complete confidence toe-first into a brick. Like most advice we’re given, the wisdom behind it is simple; the problem comes in the execution.

And while there are countless books out there offering tips on everything from how to get inspired and avoid writer’s block to the kinds of foods that promote creative thinking (which, judging from what I read, you will be doing mostly while on the commode), all of those books essentially come down to one universal truth:

Nothing promotes and stimulates writing better than…

But let’s suppose you don’t want to become an alcoholic? Does that mean you’re not truly committed to being a writer? Could it jeopardize your dream of becoming a novelist, columnist, short story writer or inner city tagger? END_OF_DOCUMENT_TOKEN_TO_BE_REPLACED

Welcome to Ned’s Nickel’s Worth on Writing, that special day each week when I offer writing tips that Publishers’ Monthly has called, “The last word in writing advice. Or so we hope.” And what 50 Shades author E.L. James has refered to as “The inspiration for most of my safe words.”

This week’s NWOW was inspired by a good and talanted blogging friend who shall remain synonymous, so we shall call her Michelle, who experienced her first truly negative response to something she posted. The reader in question was somewhat offended by what was essentilly a lighthearted post about accidentally being seen naked by a stranger. I felt Michelle’s approach was tasteful and humorous. Regardless, the reader’s response caught her off guard and caused her to momentarily question her judgement as a writer — something that readers of this blog question every day. END_OF_DOCUMENT_TOKEN_TO_BE_REPLACED 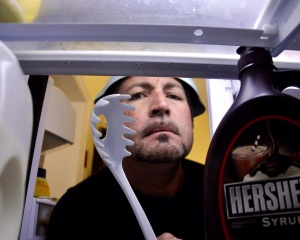 Welcome to a special post-Thanksgiving edition of Ned’s Nickel’s Worth on Writing! What makes this week’s NWOW special? It’s the only day of the year I can refer to my writing tips as “giblets of wisdom” without sounding really weird. The same goes for other Thanksgiving-themed writing idioms, such as “stuffing the bird,” “mixing my gravy” and “rinsing the gizzard.”

For those of you who may be visiting for the first time (assuming you’re still reading), my weekly NWOW is when I gather the insights gained from 16 years as a newspaper columnist and offer them like the neatly-wrapped innards of a holiday turkey; obviously important enough to include but something no one really wants to think about. END_OF_DOCUMENT_TOKEN_TO_BE_REPLACED

As Kevin Spacey once told me, “A man’s got to know his limitations.” Granted, he told me this while imitating Clint Eastwood, during a mock interview, at a fictitious nacho bar restaurant called Casa de Papitas (House of Chips). But that doesn’t make the message any less poignant. Especially when you consider how, that same week, my Nickel’s Worth on Writing compared writing to weight lifting — and how it’s easy to hurt yourself by trying to lift too much.

I can honestly say I’ve never injured anything other than my pride at the gym — an incident I blame on an unfortunate combination of Mexican food and an ill-timed squat that cleared out an entire row of stationary cyclists. However, in terms of my writing commitments — combined with my commitment to family, firefighting and the newspaper — I feel like the guy on the bench press who has suddenly realized, on the fifth rep, that he shouldn’t have added that last 10 pounds while his spotter was in the bathroom. Do I keep trying to lift, hoping I get the bar back into the holders before my arms give out? Do I bring the weight down onto my chest and wait for help from my spotter, knowing he suffers from IBS and could be on the commode for 20 to 30 minutes? Or do I, in a loud voice, announce that I had Mexican food again and allow the entire gym to clear out before dropping the bar-bell onto the floor? END_OF_DOCUMENT_TOKEN_TO_BE_REPLACED