When my wife called to remind me about letting our dog out at noon, I instinctively retrieved a Post-It from the desk drawer and scrawled “Dog at noon,” then stuck it to the computer monitor.

This required shuffling a series of other yellow Post-Its into order of importance, with things like “Call about hair cut,” “Go to dry cleaners” and “Clean out van” written on them.

That one, of course, was moved to the very end of the line.

Sadly, they’re all things I should be able to remember on my own and usually do; like when I’m staring into the closet for a pair of pants to wear. Later, I got into the van and was gently reminded by a shocking-yellow piece of paper to “get gas.”

It was while sitting at the pump a short time later that the notion of Post-It dependency hit me.  END_OF_DOCUMENT_TOKEN_TO_BE_REPLACED 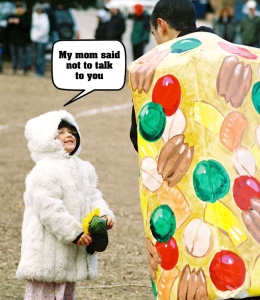 Recent studies show that anxiety during the holidays is not only common but, in many cases, the result of FDAD — Fruitcake Disposal Anxiety Disorder. On one hand, your fruitcake is often given as a gift and therefore deserving of some measure of appreciation. On the other hand, you may have already tossed it into your neighbor’s yard, where it has become a chew toy for their pit bull.

This often leads to feelings of anxiety, particularly when you see “Buster,” still intoxicated with rum, struggling to dislodge the sugar loaf from his tightly-clenched jaws.

What follows is an easy, four-step guide to help FDAD sufferers control their fruitcake anxiety.  END_OF_DOCUMENT_TOKEN_TO_BE_REPLACED

Many years ago, I bought my wife an Epilady shaver for Christmas. Because it was a sleek, modern, electrical device costing over $50, there was no reason to suspect it would feel like someone had just ripped the hair out of her legs using Super Glue and a roll of duct tape. While I’m sure I’ve gotten my wife gifts she didn’t really like, she’s always accepted them graciously. But in this case, as she chased me through the house completely naked and swiping at my scalp with her new Epilady, two things came to mind:

1) She really hates this gift,
And
2) I shouldn’t have gotten her the cordless model.

Now, before I get an angry letter from Park Products, Inc., I should clarify that this was a long time ago, and I’m sure the latest model is a vast improvement over the one my wife hurled through our bathroom window.  END_OF_DOCUMENT_TOKEN_TO_BE_REPLACED

Yesterday, I posted “I just found a squirrel in my car” as my Facebook status. I did this as part of a Breast Cancer Awareness movement on social media. Before long, those who weren’t aware of the movement began to leave panicked comments like, “What the @#$% is HAPPENING?!? People are finding squirrels in their cars EVERYWHERE!! Do they want our NUTS?!? Are they RUSSIAN?!? CANADIAN?!? High on ROCKSTAR?!?”

To anyone currently locked in a safe room eating military grade rations after reading thousands of “squirrel” statuses, I apologize. However, it doesn’t mean the squirrel threat isn’t real.

Several years ago while visiting the Grand Canyon, my chance to enjoy one of the world’s greatest natural wonders was marred by an unprovoked squirrel attack. Anyone who’s been there can tell you that the park is completely over run by hordes of crazed, hyperactive squirrels. It’s gotten so bad that the park service installed coin-operated food dispensers, the idea being that tourists could feed the squirrels while remaining blissfully unaware that the pellets were, in effect, simply a diversion meant to save their lives.

The problem is that the squirrels are now SICK of these pellets, which tourists still purchase, but now hurl directly at the squirrels while fleeing back to their cars. In most cases, they never get to see the Grand Canyon at all, choosing instead to escape by turning their windshield wipers on high and dislodging enough squirrels to navigate their way into the nearest Sequoia patch.

(Movie note: Thelma & Louise originally ended with them eluding the police, then tragically plunging into the Grand Canyon in a hail of gun fire, food pellets and flailing squirrels.) END_OF_DOCUMENT_TOKEN_TO_BE_REPLACED

It’s been more than 300 years since that first Thanksgiving, when the Pilgrims and Wampanoag Indians sat down together in celebration and, much like the Americans of today, made a solemn vow not to eat more than your standard bull elk.

We know this because of a passage recently discovered in the diary of Pilgrim Edward Winslow, who described the first Thanksgiving like this:

Our harvest be large so that we might rejoice! Our plates and bellies be full to swelling! We have feasted on meats and gathered crops, and pies of sweet fruit!
Aye, I say! I think it be time to vomit!
— Edward Winslow, Dec. 13, 1621

In spite of this kind of irrefutable historic documentation, many myths still exist about one of our most celebrated holidays. For example: Did anyone actually eat the Indian corn, or was it just used as a decoration? END_OF_DOCUMENT_TOKEN_TO_BE_REPLACED

Because everyone is busy working on their novel this month! Who has time to read a blog post — even if it’s about writing — when they have 30,000 words remaining in their 50,000-word manuscript, no to mention a 30-lb. Thanksgiving turkey already thawing in the sink?

Plus, in just a few weeks, many NaNoWriMo participants will be following up their day of giving “thanks” by attacking fellow shoppers on Black Friday for the last pair of “Walking Dead” slippers! What if their fingers get broken during a tussle at Target? Or they get walloped at Walmart? Mauled at Macy’s? Shanked at Sears? Body slammed at Bloomingdales?

Even though it’s less than a week into NaNoWriMo, a lot of writers are feeling the pressure to finish their manuscripts before Nov. 24 because anything can happen once Thanksgiving Day arrives. No one wants to take the chance of being within 500 words of finishing their manuscript, only to have it consumed in a sudden turkey flashover fire thanks to the combustable nature of aunt Renee’s new whiskey stuffing recipe.  END_OF_DOCUMENT_TOKEN_TO_BE_REPLACED

n, by their very nature, are grillers of food. If you follow me on Facebook, then you know I love grilling everything from steak kabobs to bacon-wrapped bratwurst. This is because grilling, aside from providing men with a legitimate excuse to drink beer and play with fire, is actually a sign of romance and affection dating back to the discovery of fire itself.

We know this thanks to recently discovered cave paintings depicting what archeologists believe is a romantic meal prepared by a Neanderthal named Glork soon after the discovery of fire.

Painting one: Glork makes a small fire using a careful mixture of embers, dry leaves, and an assortment of twigs. He then douses it with liberal amounts of highly flammable liquid, creating a massive fireball that scorches the roof of his cave.

When I fell for Sarah Getlost in the fourth grade, I was taking no chances. My father explained to me that women couldn’t resist a man in uniform. He told me this while wearing a white T-shirt, Bermuda shorts and drinking a beer, so I had to take his word for it. My plan was to wait for our little league candy sale and go to her house dressed in my new baseball uniform.

In theory, it was a good plan.

In reality, Sarah Getlost answered the door wearing her new cheerleader outfit, effectively neutralizing me. So, to impress her, I gave her my candy, a new baseball and all of my money. Although I wasn’t immediately rejected, it came swiftly once my mother found out and forced me to return to Sarah’s house to ask for all my stuff back. I don’t remember exactly what I said, only that it was awkward and involved a lot of gulping to keep the bitter taste of rejection from coming back up.

Although I think all that chalk I swallowed in the second grade helped a little.

Rejection is a part of life, particularly for writers. We set ourselves up for potential rejection every time we send out a query, have an article published online or in print, or post something to our blog or social media page. Thanks to the digital age, we have more ways than ever to receive rejection!  END_OF_DOCUMENT_TOKEN_TO_BE_REPLACED

As I mentioned on Friday, I was going to be dressing up as Marilyn Monroe on Saturday. Believe it or not, that’s not usually a part of my weekend “to-do” list:

Give dogs a bath.

Wear high heels and a dress.

However, somehow I got talked into participating in the “Mr. Relay” fundraiser event at our local Relay for Life cancer walk. Given that it was called “Mr. Relay,” I assumed there would be some manliness involved. Maybe some feats of strength. Or a swimsuit competition. Fortunately for me, neither of those were involved because, hey — how embarrassing would THAT be! Haha!

Instead, we were asked to dress as our favorite female movie star or character.  END_OF_DOCUMENT_TOKEN_TO_BE_REPLACED

There’s a scene in the movie “Jaws” where the Mayor of Amity Island explains how yelling the word “BARRACUDA” won’t get much reaction on a crowded beach. “But if you yell ‘SHARK’ you’ll have a panic on your hands…”

Keeping that in mind, you’ll have some idea of the reaction you get from most men if you change “shark” to “vasectomy.”

This was the first word out of my radio this morning, and yes, it caught my attention immediately. I had mine 10 years ago after weeks of campaigning from my ex-wife, who had a degree in social work. Because of this, she was trained on how to approach sensitive subject matter. That’s why I was allowed to discover, with no pressure from her whatsoever, that my new place mat at the dinner table was actually a medical brochure titled:

So, You Want To Have a Vasectomy?
END_OF_DOCUMENT_TOKEN_TO_BE_REPLACED