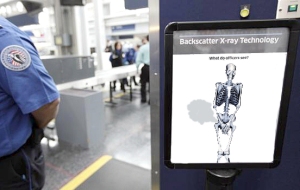 As if I needed another reason to fear flying, now they can see my flatulence.

As many of you know, I have a fear of flying. What many of you don’t know is that I also have a fear of being seen naked. Until now, I had the comfort of knowing there was almost no chance of both happening at once, unless I somehow ended up on one of those nude flights, where I would quickly be arrested for refusing to return my tray to its upright position for take-off.

But now, thanks to today’s airport security technology, I no longer have to wait until I’m actually in the air and vomiting into the seat pocket in front of me before experiencing total humiliation. That’s right. I can now get things rolling before I even board the plane by stepping into a special x-ray booth and having an airport security professional see me completely naked.

According to the U.S. Transportation Security Administration, this technology, which is standard at all major airports, took several years to introduce as an anti-terrorism tool, mainly because of privacy concerns by the general public.

“As travelers now know, we have a way to blur certain areas of the images that would otherwise be too detailed for some people’s comfort,” said TSA spokesman Alto Leering. “It’s a great alternative to a strip search — You know, unless you’re into that sort of thing.”

The machines were first tested three years ago at London’s Heathrow Airport, where Prince Charles actually helped demonstrate how areas of concern could be blurred for privacy.

“As you can see, you cannot discern how large my ears are,” he said to reporters. “And my shim-shim is completely gone.”

The press conference ended soon after, when atrport officials admitted there were no alterations applied below the Prince’s waist.

“But when you consider what we were able to do with his ears, you can imagine what we could do with a standard ‘shim-shim,’” one official said.

Needless to say, this has not helped ease my fears. In fact, it has made them worse by introducing the word “shim-shim” into my vocabulary.

While making holiday plans for my first plane flight in several years, I thought doing some research to get a better understanding of this new technology might help.

Naturally, I was wrong.

We’ll begin with the name of this technology. I was hoping for something either:

a) Extremely technical, suggesting years of exhaustive research and training, or

b) Something friendly that would make me feel looked upon in my nakedness with compassion.

Instead, I ended up with:

c) “BackScatter,” which is the name of the x-ray scanning system, and something that sounds like what could happen if I forget to remove my cell phone before I step infront of the scanner.

I should also point out that, in addition to revealing metal objects, the images can also help identify the presence of nitrogen, which appears as a cloudy area on the image; nitrogen is emitted by plastic or liquid explosives.

It is also emitted by humans when they flatulate.

As I already stated, I get nervous when I fly.

It doesn’t help knowing I could be tackled by airport security because of a “cloud” on my x-ray that comes as the result of a Taco Bell value meal and my extreme anxiety over flying.

And I don’t even want to think of what will happen if bomb-sniffing dogs become part of the scenario.

So, I’d like to thank the TSA for giving me another reason to freak out the next time I have to fly somewhere. I’m already thinking I’ll need to take a sedative to help with my nerves.

Unless, of course, it gives me gas.

(You can write to Ned Hickson at the Siuslaw News at P.O. Box 10, Florence, OR 97439, or email him at nhickson@thesiuslawnews.com)

25 thoughts on “Sadly, flatulence no longer has a place at the airport”