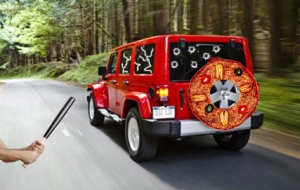 The world of fruitcake lovers is a dangerous one for those without a spare.

Every once in a while a column strikes a nerve with readers. These readers then write me to express their displeasure; they are angry, hurt, offended, or breaking in new stationery. Whatever the reason, I appreciate this feedback regardless of the fact that, in many cases, the column they’re talking about wasn’t mine. So you can imagine my shock at getting unhappy letters from people who (a) read my column and (b) actually like fruitcake.

The letters came in response to the column I wrote about Fruitcake Disposal Anxiety Disorder, which was named in a New York Post special investigation as “The fastest-growing mental disorder in the entire world.”

“And we’re pretty sure about that,” the report concluded. “If not, then it’s right up there with ‘Fear of Clowns’ or something.”

After receiving these letters, I looked back over the column and realized that, yes — it was a little insensitive to fruitcake lovers out there. So, in response, I spent time looking into what makes a good fruitcake, compared with the kind of fruitcake the rest of us receive each holiday season. After comparing dozens of recipes and then baking four different fruitcakes of my own, I realized something important — which is that, by using a six-inch bundt pan, my daughter now has a full set of tires for her Barbie Jeep.

Again, I’m not saying that there’s no such thing as a good fruitcake.

I’m just saying that if there’s an R-14, all-weather radial bundt pan out there, I’d like to know about it.

I should point out that over 21 million fruitcakes were sold in the U.S. last year, and not one of them was allowed on any flight in or out of Canada. That’s because fruitcakes have been added to the list of banned carry-on items on all Canadian flights. This is due to the X-ray machine’s inability to penetrate fruitcake, therefore making it impossible for screeners — or even Superman — to verify if they’re safe.

“Well, look at that! A fruitcake from Lex Luthor. How thoughtful!”
“Be careful, Superman.”
“Relax, Lois. What danger could there be in…WAIT! THOSE AREN’T CANDIED GUAVAS!”

Admittedly, there is a huge difference between what passes as fruitcake here in the U.S., and what the English refer to as “plum” cake. While the English version is said to be extremely moist and flavorful due to its high rum content, American fruitcake is known — like many U.S. food products — for its durability. This is particularly true of commercial fruitcakes, which are primarily used for keeping decorative tins from getting bent during shipping.

Lesley Hatcher of Panama City, Fla., who wrote in promising to change my mind about fruitcake by shipping me a homemade sample next year, is obviously very passionate about fruitcake.

Frighteningly, she’s not alone. As a member of the Society for the Protection and Preservation of Fruitcake (www.fruitcakesociety.org), she is “one of thousands” who are “spreading the gospel about fruitcake.”

(Note: After looking long and hard, I’m happy to report there’s no reference in either Testament to The “Gospel According to Fruitcake.”)

According to Lesley, the fastest way to get someone to stop making jokes about fruitcake is to give them a piece. I’m not sure if that’s supposed to change their mind or keep them from speaking, but whatever the case, I promise to keep an open mind until next year.

I may end up eating my words.

Then again, I may end up with a spare for my daughter’s Jeep.

31 thoughts on “The people have spoken! The world is full of fruitcakes”