(Welcome to Flashback… Monday? That’s right! Today, thanks to my spending the last two days with my hands on the commode as if rubbing it for a genie, Flashback Sunday is making a rare Monday appearance. In fact, the only thing more rare is anyone on Here Comes Honey Boo Boo with a high school education. As always, we will delve back into the archives, back to when my only followers were members of a terrorist cell using my blog to pass messages; back when I thought “Freshly Pressed” was a website for innovative door bell designs. Given the circumstances of why this week’s Flashback is a day late, this post seemed appropriate…) 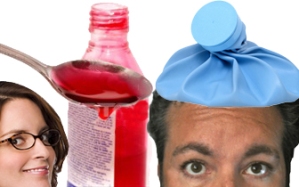 As if being sick wasn’t bad enough, my laptop burst into flames while I was on the commode. Ask Tina Fey — she saw the whole thing.

I’d like to start by apologizing for this column.

Technically speaking, I’m still writing it. However, given the volume of cold medication I have consumed, and keeping in mind that I have finally given in and, as a time saving measure, moved my workstation to the commode, there’s a good chance my current location is exactly where this column is headed. Making matters worse, the laptop I’m using is about 10 years old. Getting it open was like shucking a Pismo clam. After opening it, I realized it’s the very same model that caused panic aboard a flight to Miami when it overheated and singed the thighs of an intoxicated businessman.

True, I am not on a plane. Yet there are still some frightening similarities:

I am under the influence of Codeine.
I am in a seated position.
And if this morning was any indication, I won’t be leaving my seat for the next few hours.

The upside is that if my laptop should suddenly burst into flames, unlike that unfortunate business traveler, I’ll have the option of quickly extinguishing myself by removing the lid to the toilet tank and jumping inside.

(Did I mention I’m on Codeine?)

The good thing about getting sick is that it has forced me to slow down for a day.

I have time to reflect on things.

For example, while sitting here, I’ve discovered that static electricity from this laptop makes the hair on my legs stand up. Chances are, I never would have made this discovery at work. At least, not without receiving a warning slip.

I’ve also come to realize that by pressing our toilet plunger to the floor, then carefully manipulating the exchange of air while simultaneously working the plunger up and down in a breathing pattern, I can make it sound like Darth Vader with a really bad head cold.

Again, had I been at work, it’s likely this would have gone undiscovered (Although I can’t say for sure).

(Have I mentioned that I’m on Codeine?)

Yep, it’s just me, my thoughts, and the frequent spray of air freshener in our small, unventilated bathroom. The fact is, the longer I sit here reflecting, spraying and medicating, the less I care about slowly growing numb from the waist down. Especially if it means having an opportunity to reflect on some fundamental questions, such as why I’ve never noticed there’s a spot in our wallpaper pattern that resembles Tina Fey?

But to be honest, I’m getting a little tired of her staring.

I’m also noticing some other things for the first time. I’m not going to get into them here; it would probably sound a little crazy. Suffice it to say, once I’m feeling better, we will be changing the wallpaper, shower curtain, and quite possibly the floor tiles.

What I will tell you is that I’ve noticed our bathroom has an underlying aroma. Something that smells like, I don’t know…

Hold on a second…

Just a little problem with my laptop.

The good news is, I was able to put the flames out before any serious damage was done to my thighs. The bad news is, I had to move to the upstairs bathroom because the downstairs commode is no longer functional.

If we’d installed a low-flow toilet, things might have turned out differently. Just ask Tina Fey.

She saw the whole thing.

(Ned is a syndicated columnist with News Media Corporation. Write to him at nhickson@thesiuslawnews.com, or at the Siuslaw News at P.O. Box 10, Florence, OR 97439.)

16 thoughts on “Cold medicine: The key to true introspection”