For the moment, the government shutdown has offered a reprieve from the constant media attention The Door in our newsroom has been receiving. The fax machine is silent, which we assume is because Morley Safer has been re-assigned to the capitol instead of faxing threatening images of his rear with the words “You Will, Crack!” scrawled across the top. Likewise, it’s been 24 hours since Keith Morrison or Geraldo Rivera have made an attempt to enter the building in disguise — the last of which was actually done together, when they pretended to be Russian circus clowns seeking asylum in our newsroom. Once again our front office girl, Misty, blew their cover, growing suspicious when “Geraldy the Clown” kept asking her if she wanted to “see Al Capone’s vault some time.”

While things are quiet here at Siuslaw News for now, it’s only a matter of time before the governmental play date between the democrats and republicans ends, and media interest in The Door resumes. First-time readers of this weekly feature are probably asking, “What IS The Door?” and “Why would there be so much interest in it?” and perhaps the most frequently asked question: “How did I even get ON this site?”

While the last question will probably never be answered, I can tell you that The Door (of Shame, Blame and Brilliance) is a journalistic Mecca and home to the best and worst examples of print media clipped and pasted to our newsroom door by reporters since the 1970s. Think of it as the Smithsonian of journalistic history, or as Ann Coulter once called it, “Highly significant in its historical context, and also in the damage it would inflict if slammed in the face of every whining diaper-baby liberal grabbing this country’s teat.”

I don’t know about all that, but it does represent 40 years of hand selected print media faux pas — intentional and otherwise — that have either arrived at, been printed in or collected by reporters at Siuslaw News.

Which brings us to this week’s feature from The Door, an exhibit we call: The Many Ways to Spell Siuslaw News.”

However, before we begin we must join hands and repeat the following chant in a monotoned voice similar to roll call in the Capitol after what I’m sure was a long night of negotiating:

The Door is a beacon, drawing us into the jagged rocks of journalism

With a name like Siuslaw News (pronounced Sigh-You-Slaw Gnus), I’m sure you can imagine the creative ways we’ve seen this newspaper’s name spelled on envelopes and mysterious packages that have arrived at our office over the years. Once, during the era of anthrax scares, we did receive a package with a white, powdery substance clearly visible on the taped edges. It was addressed to our previous editor at “Silislaw News.” Fortunately, our postal person figured out who it was for and dutifully placed it at the front desk, after which he clapped the powder from his hands and left. After calling the police and evacuating the building, we nervously watched the bomb squad deactivate what turned out to be a box of powdered donuts from a new bakery in neighboring Reedsport, Ore. 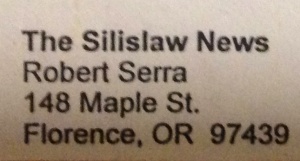 46 thoughts on “Suffering from postal identity crisis on… The Door”