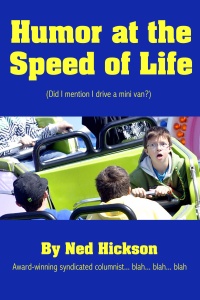 Welcome to this week’s edition of Ned’s Nickel’s Worth on Writing, when I draw upon my 15 years as a columnist to offer pearls of wisdom which, much like pearls from an actual oyster, started off as a small irritation before natural mucus secretions created something rare and highly coveted. But don’t just take my word for it! Many of today’s most prolific authors have referred to my weekly NWOW as:

Awww shucks! Enough with the accolades!

This week’s NWOW is going to be a bit of a departure because, as you can see, the shameless self promotion of my book has begun and, to be quite honest, I am discovering I have a natural God-given gift for discouraging people from buying it.

Maybe I have a subconscious desire to leap naked into a pool of lukewarm Carmel Nog coffee.

(Yes, I realize that has nothing to do with promoting my book, but I think it clearly illustrates just how truly BAD I am at this.)

Don’t get me wrong. I believe in my book. In fact, I think it’s fair to say, given the recent passing of Nelson Mandela, the world NEEDs my book right now…

Too much? You’re right. Sorry. But you can see my problem.

The truth is, a lack of self promotion skills is common among writers. That’s because we’re better at expressing observations about others than we are about ourselves. A writer sitting in a restaurant can tell you how how many times the 50-something mail carrier waiting for his to-go order at the counter checked his watch and jingled his keys, but ask them what kind of bread was on their own sandwich and they won’t remember they had pancakes. Writers make a point of inhabiting others in order to effectively communicate the subtle nuances that galvanize a compelling and believable character into the minds of readers. 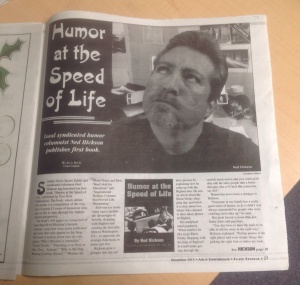 The face that launch a thousand birdcage liners.

My most galvanizing quote from the Coast Central entertainment article to the left?

“A couple of years ago I was sitting in my car…”

See what I mean?! BOOOR-ING! Sure, there was more to that statement, but you can see it was already heading off a cliff on its way to destination: Boringsville.

Here’s another riveting quote from that article that will get people to run out and buy my book:

“…I’ve been talking for several years…”

Again, there’s more to that sentence, but who’s going to read it if they can’t stay awake? And I can’t fault the writer, Jack Davis. He did the best he could with what he had to work with. Those are actual snippets from my quotes, so you can see he had his work cut out for him. And remember that I do a lot of public speaking, and not just when ordering fast food, but in front of actual crowds who aren’t holding carnival tickets. I’ve hosted pageants, spelling bees and dozens of fundraisers, spoken at churches and clubs about writing and humor… but ask me to promote myself and you get:

Fortunately, I was smart enough to enlist the help of some folks to speak on my behalf for the back cover of my book. I guess you can think of it as pre-emptive spin control, like George W. Bush’s White House press secretary clarifying things before and after each presidential address. Except without the free cowboy-cut steaks and baked beans in the press room. My point being that Outback Steakhouse turned down my idea of offering a free Bloomin’ Onion coupon on my back cover. So instead, we went with this design which, as you’ll notice, leaves a small space at the bottom should Outback change its mind on the coupon opportunity… 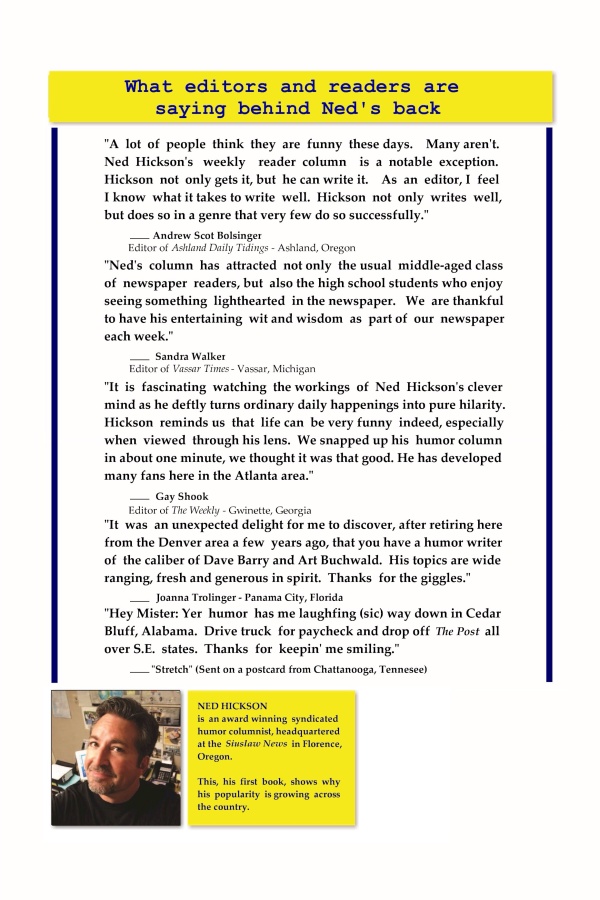 The one thing I can talk about with some level of authority is the cost of the book. That’s because, as someone who writes for a living, I can tell you I probably couldn’t afford a copy. I’m not saying YOU shouldn’t buy one! Hahaha! That would make me the worst marketing person ever! What I am saying is that I had no say in determining the price, so please don’t be mad at me when you see it and always, always remember that I love you.

If you decide to wait for the cheaper eBook version in January, I will understand. Although those copies are a lot harder to sign.

As I said at the beginning of this post three days ago, today’s Nickel’s Worth was going to be a bit of a departure. Thank you for not only coming along, but for always joining me on the platform when this crazy train pulls into the station.