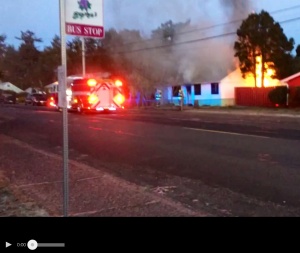 Normally, this space would be reserved for The Box. Then again, I don’t normally get tapped out for a fire first thing in the morning; usually those calls come in the middle of the night when I have to pee, forcing me to hold my full bladder while spraying 125 lbs. of water pressure through a nozzle. And although I don’t have an excuse from my mother, I do have this video captured by our station captain who, although out with a knee injury, hobbled to the scene from his house down the street.

That, my friends, is dedication. And a lot of Demerol. He’s the one doing the narration while talking to a bystander. I love the pride in his voice. Or, perhaps once again, that’s the Demerol talking…

In either case, total elapsed time from tap-out to “knockdown” of the fire: 9 minutes and 27 seconds. Our three-man crew on engine 2, which was first on scene, was myself as driver/engineer, along with Chris on the nozzle and PJ on the hose. Within one minute we were joined by two additional engines, which provided hydrant hook-up, a secondary interior team and a safety team.

The best part of this story? Except for some smoke inhalation, no one was hurt. The woman who lived there got out safely and we all went home to our families. Except for our captain, Boa, who is still out wandering the streets…

Yes, I admit it — that’s some pride in my voice. And I’m not even on Demerol.

Although I do have to pee.

Does this mean there won’t be an edition of The Box this week?!!??

Well, yes — but only because we have a rare and exciting addition to The Door (of Shame, Blame and Brilliance) in our newsroom.

Look for it tomorrow morning!

Oh, and while you’re at it, please keep an eye out for our captain. He couldn’t have gotten far…

36 thoughts on “Sorry I’m running late, but I have a burning excuse (no, it’s not that kind of burning)”