(Welcome to Flashback Sunday! If you’re here, that means you’ve either (1) stumbled onto this blog completely by accident (so relax, you have an excuse), 2) You’re here for the first time because someone recommended it (a good excuse to find new friends), or 3) You’re a regular reader of this blog (for which there is no excuse). Whatever the reason, thanks for joining us for this week’s flashback, which is my excuse to pull something out of the archives you probably missed (But I’m sure you had a good excuse…) 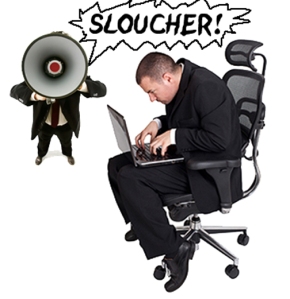 We all make mistakes. The difference is, when you make one, you probably don’t get contacted by someone from the American Chiropractic Association in Arlington, Virginia.

Or maybe you do.

In which case you may want to consider leaving this blog right now and going in for an adjustment.

But unless you mistakenly informed readers that last month was National Correct Posture Month when, in fact, we’re all free to slouch until May, I’m guessing you’ve never gotten an email from Angela Kargus, Communications and Public Relations Manager for the ACA.

There are two things I know about Angela:

1) She is very nice.
2) She probably has excellent posture.

I also know she read my column a couple of weeks ago. As Angela pointed out, it proclaimed “National Correct Posture Month” in the wrong month and also provided recommendations on how to avoid slouching that Angela informed me were “outdated.”

It’s true. Even as a trained professional, I somehow overlooked the more recent recommendations made specifically for today’s slouching public. Because of this, I’d like to apologize. Particularly to those of you who, based on my recommendation, are being followed around by someone with a bullhorn yelling “SLOUCHER!” whenever you slump your shoulders.

I think Angela and I would agree you should stop this immediately because, to be quite honest, it’s possible you have more important issues to deal with than posture.

Not that posture isn’t important.

My point is, as a journalist, there’s nothing more important than credibility. Except for maybe having Spellcheck. That’s why when we in the news media make a mistake, we hold our heads high. We step forward. And we admit, through an error in judgement, we hired James Frey as a fact checker.

However, this wasn’t the case when it came to the errors in my “slouching” column. No. I’m taking the burden of that mistake squarely on my shoulders because that’s what columnists with good posture do.

First, because I have no one to blame but myself. And second because, thanks to the ACA website, I now have the name of a good chiropractor. Though I have not gone to him yet, his nickname “Dr. Thunder Thumbs” certainly has me intrigued. So intrigued that I haven’t slouched in nearly a week — and that includes while sleeping or using the commode, which I once did simultaneously. But that was a long time ago in a friend’s dormitory.

I would like to say even though I was wrong about “National Correct Posture Month,” National Spinal Health Month is fast approaching

And so is Auto Battery Safety Month. My suggestion is to actively participate in both by combining the two and hooking a pair of jumper cables to your…

On second thought, I’m going to check and make sure this idea meets the approval of both the United Spinal Association and someone from Die Hard.

That said, I’d like to thank Angela and the ACA for straightening me out on the whole posture thing.

11 thoughts on “Setting things straight with the American Chiropractic Association”