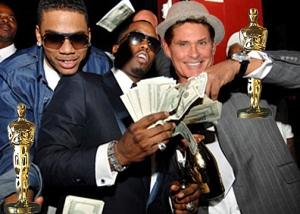 See how getting “Jiggy” saved the Intoxicated Karaoke Awards?

(A timely excerpt from my book, Humor at the Speed of Life that could single-handedly save awards shows. And by “single-handedly” I mean one-handed clapping…)

As you probably know, we have now entered the annual “awards show” season, which officially began with the Golden Globe Awards, and is due to wrap up some time in April, when David Hasselhoff hosts the coveted Intoxicated Karaoke Performance Awards live from Tijuana, Mexico.

Every year, I watch at least some of these awards shows because, as a columnist, it’s important for me to keep up with cultural trends. I also watch because seeing Nicki Minaj always makes me feel better about the way I dress. However, according to a recent poll, ratings for awards shows have actually dropped. So much so that programming executives are calling it “an alarming trend.”

Personally, I think the word “alarming” is a little strong.

Coolant levels steadily leaking from a nuclear reactor — THAT’S alarming; a decline in the number of people tuning in to see how long it takes for a fight to break out at the Rap Awards is actually pretty encouraging. The obvious reason ratings are down is because the number of awards shows is up. The entertainment industry must ask itself if it really needs The Golden Globes, The Oscars and The Peoples’ Choice Awards in order to single out Hollywood’s finest when they could just as easily save time and money by combining all three into, say…

Okay, bad example (Although, it does sound like something that’s probably available on cable.)

The monumental length of these shows is another problem. When a person can receive “Best New Talent” and the “Lifetime Achievement” award during the same broadcast, I say it’s too long. I’ll go even further and say that we could actually learn a few things from the Rapp Awards when it comes to cutting the length of these programs — especially when you consider last year’s Rap Awards lasted only 11 minutes (five of which showed nothing but an overturned buffet table moving toward the exit under gunfire.)

After approaching several top programming executives about my idea, I was, of course, immediately wrestled to the ground. This led me to organize a brainstorming session with Rap producers Bigg-E-Mac, Mac Daddy, and Dubl-Bigg-Mac-Combo—with the main goal being to come up with a comprehensive list of ideas aimed at shortening the Oscars.

And the secondary goal being for me to acquire a really cool “aka,” which I was given almost immediately:

What follows is a three-step process that could potentially save the Oscars by making them shorter, more exciting, and, quite possibly, a little more “jiggy.”

Step one: Get rid of the red carpet arrival and limit each celebrity to one drive-by. Non-celebrities would also be allowed a drive-by, but only in groups of eight or more, and only from the back of a Lincoln Continental assigned before the show.

Step two: Upon arrival, each celebrity will be issued a posse which, in turn, will spend most of the evening glaring at another posse. This will no doubt speed things up as celebrities, sensing a rising tension between rival posses, cut their acceptance speeches in order to leave before things get “wack.”

Step three: Move the Oscars to an abandoned warehouse in Culver City. There are a couple of reasons for this. First, there’s the obvious cost savings. Why rent a theater when, with a little planning and a phone tree, everyone could just arrive and take over an empty warehouse just long enough to hand out the awards? This would also add a dramatic element to the show as it tries to finish up before the police arrive.

And there you have it, a simple, three-step solution to save the Oscars, compliments of me and my homies.

Now if I could just find my posse…

37 thoughts on “Were you mesmerized (fell asleep) watching the Golden Globes too?”