Am I the only one uncomfortable with the term “Naked Chik’n?”

In today’s society, the relationship between carnivores and vegetarians is often tentative at best. Meat eaters look upon vegetarians with suspicion because, hey:
If we weren’t meant to eat animals, then why are they made out of meat?

Vegetarians, on the other hand, point out what separates us from animals is our ability to override our natural instinct, as human beings, to gag on tofu.

This uneasy co-existance is nothing new, and actually dates back to the very first vegetarian caveman who, after swearing-off meat in front of his clan and a panel of cave elders, was promptly eaten. Because of this, mistrust between carnivores and herbivores exists to this day. One example can be seen in the design of supermarkets, which strategically puts meat at the back of the store and fruits and vegetables near the front; should carnivores suddenly riot in the event of a rump roast shortage, herbivores will at least have a head start in getting to the exits.

However, thanks to astute reader Rebecca Schilling, who read my recent post about male enhancement nasal spray and said she “felt this was a good place to talk about fake meat,” I learned of a fungus-based meat substitute called “Quorn.”

Wait, it gets worse.

Before we get to that, you should know Quorn is the best-selling meat alternative in the United Kingdom. While some say this is because of the product’s natural chicken-like flavor, others say it’s because of Quorn’s catchy advertising slogan:

You can’t get Mad Cow from a mushroom-like fungus.
And we’re pretty sure about that.

Just what is Quorn? And what makes it different from the “fungus-based” meat that already exists somewhere in the back of my refrigerator between the “fungus-based” sour cream and salsa? There are several differences actually, beginning with the fact that I’m too lazy to get FDA approval for any of my fungi. Plus, according to The Vegetarian Society, making a protein-substitute fungus from actual meat inside my refrigerator is called “cheating.” But the biggest difference is that Quorn is technically a mold, called Fusarium venenatum, which the company’s website said was discovered in 1967. To be honest, I’m still not sure if that refers to the discovery itself or how old my sample product is. 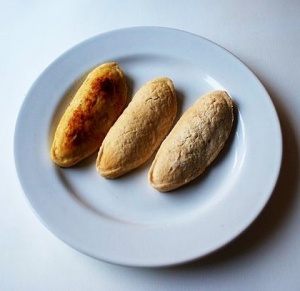 Based on these samples, I’m not sure if I should cook them or try extracting dinosaur DNA.

Either way, the venenatum mold strain underwent an extensive 10-year screening process before being cleared for human consumption in the UK. Then, in 2002, Quorn was given approval by the FDA here in the U.S. following a rigorous two-phase testing procedure that included 1) an intern consuming a plate of fried Quorn fingers, and 2) a thumbs-up from the intern after returning from the commode. Admittedly, this is an assumption on my part, based on an actual quote from the FDA’s website calling Quorn a class of foods “generally recognized as safe.”

As this ad from the UK demonstrates, eating Quorn will make you three times larger than most athletes. Or at least hallucinate about it.

To me, the real test of how Quorn will effect the prickly relationship between meat eaters and vegetarians will come when supermarket owners are faced with the decision of WHERE to put this new product. Should it be up with the vegetables? Back with the meats? Next to the Activia? Across from the Ex-Lax?

And what if there’s a Quorn shortage due to a recall? Will skinny, healthier vegetarians be able to survive?