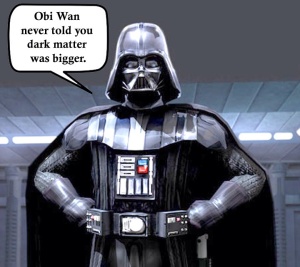 I certainly feel a deeper kinship with the surrounding universe. Particularly after reading how, like my own waistline, it is continuing to expand as it gets older. According to an article in TIME magazine last week, astrophysicists at the Harvard-Smithsonian Center for Astrophysics are close to answering one of the fundamental mysteries of space: how members of the Kardashian family can take up so much of it in tabloids.

To fully understand this phenomena, researchers at the center have turned to a property of space called “dark matter,” which I promise only sounds like another Vin Diesel “Chronicles of Riddick” sequel. In fact, dark matter is something parents have suspected for eons, but astrophysicists have only now proven the existence of: An invisible matter with a gravitational force stronger than normal gravity that pulls in the opposite direction. It is this property that 1) keeps the universe expanding in spite of the pull of planets, and 2) naturally occurs in children, which explains their ability to pull parents in two directions at once.

The other effects of “dark” gravity aren’t as straightforward. In fact, the differences between the two types of gravity are a little hazy; both are invisible and both essentially spend all their time pulling things. And just to clarify, we have moved on from children now. Here are a few examples to help illustrate the difference between regular and “dark” gravity:

Push-starting your car by rolling it down a hill is gravity; if the car doesn’t start before you get to the bottom, that’s “dark gravity.”

And the discovery of light and “dark” doesn’t end there. Apparently, physicists have discovered that matter also has a bright and not-so-bright side. While regular matter is easy to see, taste, touch and feel, “dark” matter is an invisible substance that, by a ratio of 10 to 1, outweighs all visible particles within stars, planets and people.

This is why eating a three-ounce candy bar means that you will gain — on average — 26 pounds. It’s all of that invisible “dark” matter surrounding what we eat that’s causing America’s obesity problem, not the calories or lack of exercise. The trick is to find a way to remove the “dark” matter from our food sources. This is harder than it sounds since scientists have no idea what dark matter really is, what it looks like, where it comes from or if it’s unhealthy to consume.

The only thing we know for sure is that it was recently approved by the FDA.

However, lead Harvard-Smithsonian Center researcher Dr. Esra Bulbul believes her team is close to isolating an x-ray signature of dark matter, which is created by the deterioration of a subatomic particle called “sterile neutrino.”

The fact that all male researchers on the x-ray project are also sterile “is purely coincidental,” said Bulbul.

Though there were a handful of other revelations in the article I read, nothing compares with how the universe will eventually collapse. Much like the elastic waistband in my swimming trunks, the universe will continue to stretch until it reaches a point of critical mass known as “The Big Snap.”

What happens after that is anyone’s guess.

As for me, I’d rather not dwell on the gravity of such matters.