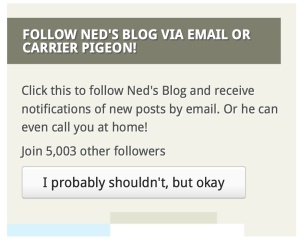 I know it’s Thursday, a day I don’t normally post. But WAIT! I can explain! Yes, I know I probably should’ve called first. But sometimes things happen that are out of our control. Like three pregnant Kardashians. Or when the dog rubs his butt on the carpet when we’re not home. In this case, however, what has happened is actually a happy thing. An exciting thing. And something that, for the most part, won’t leave a stain on the carpet or the next generation.

Back on June 7, this blog celebrated a milestone of picking up its 4,500th follower. After the party (My thanks to all of you for staying to help clean up, by the way), I set a goal of seeing if this blog could reach 5,000 by Aug. 16, when I turn

I felt it was a bit of a stretch, but stretching is something I’m trying to do a lot more of lately, especially since it’s getting easier to throw my back out or pull a groin muscle. Over the last several weeks, I’ve watched in amazement realizing there was a good chance I might actually make that goal. When I woke this morning and saw this blog had actually surpassed 5,000, I sprang up out of my chair and hollered “OWWWWWW!” because I had pulled a groin muscle.

But while hunched over and banging my fist on the table I was still appreciative — and more than slightly awed by the support I’ve received from each one of you. When I celebrated the milestone of my 1,000th follower a little over a year ago, I never would have imagined another 4,000 people would willingly subject themselves to this blog on a regular basis. Not without payment.

My father always told me nothing expresses appreciation with more clarity and sincerity than a handshake and two simple words:

Please accept my firm handshake or, if you’re comfortable with it, my heartfelt and appreciative hug. I promise to keep my hands above the waist. (Sorry, Hook)

As a measure of my appreciation, particularly to those who read Monday’s post and have been asking about the many references from readers about my pole-dancing face-plant, I am including documented evidence of my klutziness below. And by “below,” I mean below this paragraph, not… you know… below… 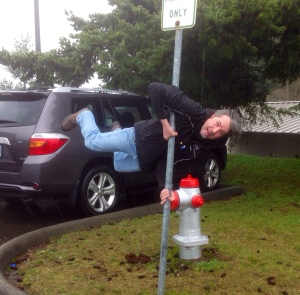 After taking the above photo, we all had a good laugh. Then my loving wife suggested we take it up a notch. “Hey, let’s do a video of it!”

Keep in mind that my wife and son were both remaining warm and dry in the car during all this, and that I — along with the pole — were getting wetter by the minute. I, of course, took all of this into consideration before putting my foot down and answering with an unequivocal, “OKAY!”

With that take safely recorded, the smart thing to do would have been to get into the car and drive home. But then I asked myself, “Would Martin Scorsese quit with one take? Would Stanley Kubrick? Sure, NOW he would. But what about before he was dead?”

The second take didn’t go quite so well..

Thanks to the rain, things didn’t get much better…

Should the police ever decide to investigate what I’m sure were numerous reports of a man attempting to commit suicide by sliding down a pole face-first into the mud, I’ll be easy to find. That’s because, in addition to the lasting impression I made on those who witnessed this event, I’m pretty sure there’s also a good impression of my face at the bottom of that pole…

Again, Thank You all for joining me on a regular basis for life’s face-plants.

92 thoughts on “As you might expect, I’m celebrating this milestone with a face-plant”