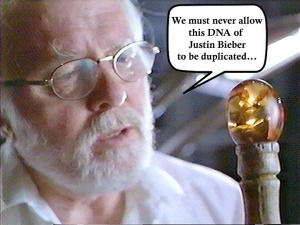 It was 14 years ago this week that the bucardo mountain goat became extinct after a tree fell on the last of its species in northern Spain, prompting scientists to ponder the age-old question:

If a tree falls on a goat in the woods, does it make a sound?

To that end, U.S. and Spanish researchers are now collaborating to utilize cells preserved in liquid nitrogen to create the very first clone of an extinct species — beginning with the bucardo, whose scientific name is goatus stupidus. While I can appreciate the enormity of this scientific milestone, it also raises a fundamental question about our genetic science capabilities:

Should we duplicate an animal that wasn’t smart enough to avoid its own doom by moving a couple of hooves to the left?

According to researchers, the Massachusetts-based company currently working on the goat project has already cloned the near-extinct gaur — a humpbacked cow from southeast Asia that is on the endangered species list because of its propensity to get stuck in small openings and starve to death.

And what about the meestupido, a relative of the polar bear that resides in Siberia and is now dwindling in numbers because of its flawed instinct to stop eating and remove all of its hair before going into hibernation?

Angola’s yellow-billed, purging cockatoo? The extremely rare, trunk-swallowing elephants of China? The sand-drinking lizards of the Sahara that tragically fill themselves with sand and are then sold as hacky sacks?

The point is, I believe our growing capability to de-extinct a species makes it necessary to devise guidelines to help determine the difference between extinction and “natural selection.”

Because I know scientists are busy, and because if I end my column here it would be about 250 words too short, I took it upon myself to host an impromptu conference call with a panel of philosophers, geneticists, researchers and an extra from the original Jurassic Park.

Composed a short list of considerations that can help genetic scientists determine those species that should be rescued from the brink of extinction — and those that were meant to jump off the edge.

Immediately, we all agreed Justin Bieber should never be cloned. Even if he is struck by a falling tree or gets stuck in a revolving door. Either of which is entirely possible.
We also determined that in order to be cloned, a species should:

1) Not be instinctively suicidal.
2) In some way advance the eco-system, either by its direct contribution to the food chain, or by its marketing potential as a mascot for fast-food chains.
3) Not be any type of insect (Everyone on the panel agreed that we have plenty).
4) Not resemble a species we already have; between brown chickens and white chickens, one will have to go.
5) Never have been the subject of a Stephen King novel.
6) Have potential as an offering to alien invaders.
7) Be no bigger than an SUV.

If scientists follow this basic list of criteria, we will be able to prevent the tragic duplication of things like flightless birds, lemmings, rabid St. Bernards, lawyers and the beakless hummingbird.

And let me just say that, for the sake of our own species, we really need to get our obesity problem under control if we want to avoid No. 7.

49 thoughts on “Let’s face it, scientists: Some genes are meant to be folded”