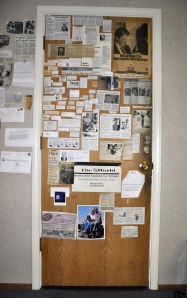 The Door, sentinel of journalistic history since the 1970s; preserver of privacy to the restroom.

For the time being, it seems major news outlets like ABC, CBS, NBC and The 700 Club have backed off in their pursuit of an exclusive on The Door (of Shame Blame and Brilliance) here in our newsroom. It’s been more than a week since Barbara Walters has called and threatened to “DESTWOY your CAWEERS!” And thanks to a case of hemorrhoids, Morley Safer has stopped faxing us images of his rear, which were starting to resemble a topographical map of civil war battle sites.

We’ve also heard nothing from Anderson Cooper, who seemed to lose interest in what he called “Possibly the most important piece of journalistic history since Chris Cuomo” once he discovered the other side of The Door had a commode instead of a closet.

So let us continue on as we do each Tuesday, and highlight an example of journalistic shame, blame or brilliance from The Door, which reporters have been contributing to for nearly 40 years in an effort to preserve history and, thanks to four decades of glue and tape, keep The Door from collapsing in on itself.

But before revealing today’s artifact, we must participate in the sacred tradition established by the the very first journalists (to smoke something other than tobacco) by joining hands and repeating the following phrase in a monotoned voice similar to any teenager on vacation with their parents:

“The Door is a beacon, drawing us into the jagged rocks of journalism.”

Today, we have an example of photo-journalism at its finest, demonstrating how a well-composed image can sometimes help illustrate what words can’t — possibly because it would be too gross. This clipping comes from our own newspaper in 2008, when a man attempted to pick up his Papa Murphy’s pizza a little quicker by making his own drive-thru. Thankfully, no one was seriously injured in the incident…

The image as it appeared in our newspaper, destined for greatness on The Door

…However, upon closer inspection it appears an injury is about to occur after the incident, depending on how deep one bystander is willing to dig for answers.

If she were a reporter digging for the truth, no one would ask for her sources.

Because I frequent this particular location, I’m happy to say this person doesn’t actually work there. If she does, you can forget about me ordering anything with pesto sauce…

(Note: This is the final entry in what has been a month-long retrospective of The Door, which was the very first regular feature on this blog. If closing The Door makes you sad, let me know! I could be persuaded to hold it open a little longer because, hey — I’m a gentleman!)