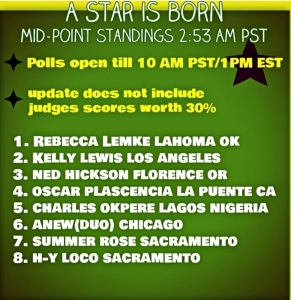 With less than two hours remaining before voting closes in the third round of the Performance of the Year competition at The Public Blogger, I thought I’d share an update on where I am in the rankings — and thank you for keeping me in the top three against some stiff competition. I suppose it’s too late to add a stanza to my poem that reads:

Judges are wonderful,
judges carry our hopes,
if they score me well,
I promise to loosen their ropes.

The judges’ scoring, which accounts for 30% of our total score, hasn’t been included yet. That means, depending on how they score my poem (and judging by their initial scoring, it won’t be much), I could drop me a little further depending on how many more votes roll in before the 10 a.m. deadline.

Either way, I still feel fairly confident I’ll make it through this round somewhere IN THE TOP 7! I say that with ALL-CAPS and an EXCLAMATION point to sound CONFIDENT! Even though, as I write this, I am in a fetal position under my desk…

Anyway, no matter what happens when the polls close in a couple of hours and the official announcement is made at noon, I want to thank you all so much for your support, enthusiasm and encouragement. As I mentioned when all of this began three weeks ago, I don’t normally participate in these kinds of things. There have been moments when I’ve questioned my decision to do so because of the time commitment and added pressure of competing each week and repeatedly asking for your vote. But in those moments, your support, along with the support of my family and incredible wife, has gotten me through those moments of doubt and encouraged me to keep going.

Thank you for having my back, whether it be for a push or a pat.

And I’m sorry about that time you were behind me when I was wearing a thong.

In the meantime, if you haven’t had a chance to see this week’s entries from the other seven nominees and voted, just click on the icon below. It will take you to where all of this week’s submissions are on display, with a voting “booth” at the bottom of the page. You can vote for up to three nominees, then just push the “vote” button.

When the results are made official, I’ll post them here. Until then, I’ll be waiting here in a cannon ball position… 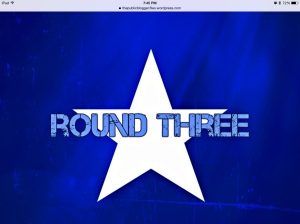