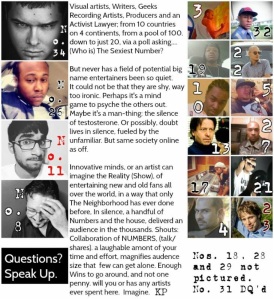 I’ve seen a lot of strange things on Facebook;

A naked guy playing flaming bagpipes while riding a unicycle.

But a few days ago, as I was scrolling through my Facebook notifications, I was tagged in a post with 35 others who had been listed as “The Neighborhood’s Sexiest Men.” I stared at it for a moment then, naturally, decided to restart my iPad.

Something was clearly wrong, like that time Rick Astley’s “Never Gonna Give You Up” started playing on my laptop and wouldn’t stop until the battery ran out.

I wasn’t about to re-live that nightmare again.

That’s when my wife came in and pointed to the same link, which she shared to her Facebook page with the comment, “Yep. That’s my HUSBAND!”

The truth is, I’ve never thought of myself as sexy. I was the skinny nerd in school. Had braces. Was physically capable but not particularly athletic. Didn’t go on my first date until I was almost 20. Was embarrassed about having an enormous [censored]…

Haha! Just kidding! I actually went on my first date when I was 18. *cough cough*

Anyway, it got me thinking about the qualities that others might find sexy about me. And the more I thought about it, the more I realized whatever those qualities are, they come as a direct result of the love I share with my wife. That’s because, in my mind, what makes a person “sexy” isn’t as much about looking good as it is about being good at who you are. And without question, my wife’s love, support and encouragement to be myself — as a humorist, husband, father, firefighter — have given me the freedom and inspiration to pursue the things that define me and, ultimately, my best self.

Though an attractive person catches the eye, confidence and realness is the kind of “sexy” that catches the heart and the imagination.

For example, imagining me naked is better than seeing it in real life.

Whatever the reasons for being included on this list, I’m very flattered. But even more so, I’m thankful for the kind of love that makes me “sexy” in the first place.

That being said, here’s an example of the kind of sexiness my wife has come to expect from me…

63 thoughts on “I’m not exactly sure when “sexy” happened”