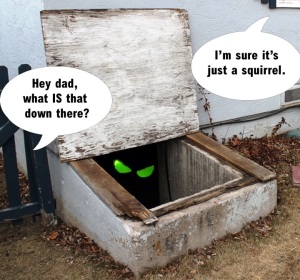 There comes a time in every man’s life when he must set an example for his son by crawling under the house to fix something. This must be done with apparent fearlessness even though he knows whatever needs fixing is going to be located in the darkest corner of the home’s underbelly, probably behind a spider web the size of a commercial fishing net.

Several years ago, I used plywood to seal up the underside of our home and stop what I suspected were nightly “rave” parties hosted by our cat. These parties generally started around 11:30 p.m. and were held directly beneath our bedroom floor, where it sounded like 20 cats playing Twister. Naturally, I had no choice but to break up these parties by getting out of bed and shoving our 60-lb. Labrador headfirst through the crawl space in our closet floor.

My point is this: Sealing things up stopped the cat parties. Unfortunately, it also turned the crawl space under our home into a frightening black void where, thanks to evolution, a species of hairy, sightless, spider-like rodents with large fangs and the ability to mobilize telepathically has nested, colonizing into the hundreds.

I know this because I’ve shined a flashlight down there and — this is not an exaggeration — I’m pretty sure I saw something move.

It was this thought (along with how I might turn a butane lighter and a can of my wife’s hair spray into a flame thrower) that came to mind last weekend as my son and I stared into the dark opening of our crawl space.

“Is Mom making you go down there?”

My son thought about this a minute. “But Mom tells you what those things are, right?”

“Pretty much,” I said, then dangled my feet over the opening.

“What are you going to DO down there?”

I explained that one of our bathroom outlets wasn’t working, and I thought it was because something had chewed through a wire.

“What chewed through it?”

Even at age 14, my son wasn’t ready for the truth, which was that hordes of slobbering, milky-eyed creatures were waiting in the dark, excreting a web-like substance from their bulbous posteriors and communicating with each other telepathically that a 180-lb. Happy Meal was about to be served. So, to preserve my son’s innocence, I made something up.

“Probably a squirrel did it,” I said.

His expression relaxed as he handed me the flashlight, then offered a final piece of advice. “If a squirrel lets you pet him, he probably has rabies.”

“Good tip,” I said and eased down into the crawl space.

Moving on my hands and knees toward our bathroom, it wasn’t long before I had passed the point of no return. This, of course, is when my flashlight decided to blink out. Throttling it with both hands, I shook it back to life just long enough to illuminate the area above me — including a dead squirrel dangling from an electrical wire by its teeth.

Sure, in retrospect, attempting to defuse the situation by screaming uncontrollably may not have been the “manly” thing to do. However, I credit that mind-numbing howl with scaring off the spider-rodent creatures long enough for me to dislodge the squirrel and repair the exposed wire. Unfortunately, in all the commotion, I also dropped my wife’s hair spray — which means I’ll have to go back.

But only if she makes me.

Ned Hickson is a syndicated columnist with News Media Corporation. This has been an exceprt from his book, Humor at the Speed of Life, available from Port Hole Publications, Amazon.com, Barnes & Noble or the trunk of Ned’s car!

65 thoughts on “It takes manliness to crawl under the house, even if you’re screaming”