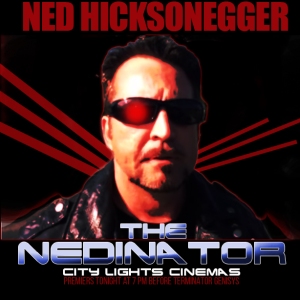 A year ago next Wednesday, the infamous “Terminator” spoof “The Nedinator” shocked the world! Or at least those who came to the premier at our local movie theater and witnessed me in a red thong on the big screen for 17 seconds.

Fortunately for everyone, we didn’t have the budget to make it in 3D.

To mark the anniversary, I’m putting together a Special Boxed Set Edition (at least in blogging terms) for next week.

In the meantime, this post from a year ago today explains how and why it all got started, just as I explained it to James Cameron’s lawyers…

For anyone who reads this blog regularly, it’s no surprise I’ve had my share of strange days.

But when you go from being on the sand dunes wearing nothing but a red thong, to putting out a car fire after witnessing a head-on collision all in a span of 15 minutes?

Even for me, that’s a day you circle on the strangeness calendar.

For those of you who are just now catching up after “…on the sand dunes wearing nothing but a red thong..,” it’s understandable. To be completely honest, after nearly two days I’m still finding sand in places I’m not even sure my physician knows about.

Many of you probably have questions:

Why was he on the sand dunes in nothing but a red thong?
How is it he makes his living again?
Does his wife know?
Did someone please cut his scene from “Magic Mike XXL?”
Was the accident caused by the glare from his [censored]?

After going through the sequence of events in my mind, there’s really no way to explain it other than just tell you what happened. Read more…

Exactly as it happened.

No embellishments, exaggeration or stretching of the truth.

And let me just say that “stretching” isn’t a word I’m particularly comfortable with right now.

I should preface things by going back a few hours, when I approached our publisher about an idea I had (Yes, she laughed too, but please stay with me) about using funny video shorts to help promote local businesses online. I made one just for fun when our theater premiered “Jurrasic World” and it was a small hit on our newspaper’s Facebook page.

With the new “Terminator” movie coming out, it seemed like an opportunity to expand on the idea and make a longer video as “The Nedinator” makes his way through time — and our local businesses — to get tickets to the premier.

To help sell the idea, I decided to put together a short promo that our sales people could show advertisers. In addition to using some of the previous Jurrasic World footage as a reference, I decided to include the iconic “arrival” scene that’s in every Terminator movie as a way to offer a glimse of “Terminator: Nedesis” which required, um… more than a glimpse. Actually.

This brings us to the red thong.

In order to appear as if I’ve arrived in true “Terminator” style, naked and in a giant divot — which in this case is in the sand of our signature dunes — I had to figure out a way to look naked without actually being naked. To do this, my wife let me borrow her red thong underwear (which she told me I could keep) in order to create the illusion. So with my new selfie stick, my iPod and a special prop (no, not that one) I headed to Sand Master Park, which is a sandboarding park in the dunes just outside of town. I’ve known the owner, Lon, for several years. So when I asked him for a quiet spot where I could shoot a video of me pretending to be naked while wearing nothing but a red thong, he merely blinked and said “Sure. But you’re not using any of my boards.”

To make things as quick as possible, I had already planned every shot in my head. So when I found a secluded spot in the sand out of the way and behind large piles of gravel, I set everything up before stripping down. With everything in position, I pressed the “record” button and scampered (yes, it was definitely a scamper) up the sand and into position. But just as I gave my best “Terminator” look, I heard the unmistakeable high-pitched whine of an ATV approaching on the ridge behind me.

I immediately began scrambling (yes, it was definitely a scramble) for my pants as the whining slowed to an idling engine.

There wasn’t time to be modest; I needed to have this thing ready by 5 p.m. for the sales meeting.

“Screw it,” I mumbled and kept taping.

Looking back now, I had no idea that decision was going to prove potentially life-saving for someone else in less than 10 minutes.

As I kept taping, the ATV rider took off (who could blame him?) and I completed made the first shots. The last sequence was of “The Nedinator” sliding down the sand hill on a disc. So sitting criss-cross apple sauce and hiding any visible fruit, I started down the sand just as a GIANT frontloader arrived along with an equally GIANT dump truck. Apparently, I had wondered out of the park and onto the property of a gravel company.

I can honsetly say they looked as horrified as I did.

But again, no time for modesty. I hurried down the sand in my red thong and approached the two heavy machinery operators and, as logically as possible, explained what I was doing.

“Knock yourself out, man.”

Five minutes later, I had my final shot and enough sand in my [censored] to fill a small elementary school playground. I dressed and stopped off at the main office to thank Lon.

BUtah before I could get through the door, I heard the shrill shriek of brakes leading to the impact of vehicles traveling at high speed on the main road about 100 yards away. Other cars were also skidding to a stop

More than one person was yelling “CALL 911!”

I dropped my gear and raced to the road, leaping over a sunroof that had been ejected about 30 feet from one of the vehicles. The occupants were exiting and appeared to be relatively unhurt; just panicked. People were already helping them, so I turned my attention to the other vehicle, which had all of its air bags deployed with no movement inside. I approached the driver first and made contact, asking her name and if she was hurt. It was clear that aside from being shook up, she was relatively unscathed thanks to the air bags. Her passenger, who happened to be her husband, had a small gash on his left wrist and was complaining about his ribs hurting, but he was moving with minimal effort and it didn’t appear to be serious.

Because they were both elderly and I wasn’t sure about the extent of his rib damage, I told them emergency crews were on the way and to stay in the car until they arrived.

Then I saw the flames.

“It’s on fire!” someone yelled

Small licks at first, rolling from under the hood, then suddenly growing. I spotted one of the employees at the sand park and asked if he had a fire extinguisher at the office. He took off like an Olympic sprinter as I told the couple in the car that we had a change in plans and needed to exit the vehicle. Enlisting the help of some bystanders, we were able to get the couple out and away from the car just as the park employee arrived back with a small extinguisher. By then, the fire was starting to blister the paint but steady bursts of powder from the canister put things out quickly.

As emergency crews arrived, I saw my duty chief and gave him a quick rundown. He immediately took command of the scene and I watched proudly as my friends and fellow members of our first-responder teams turned chaos into coordinated control. I’m sure I speak for all of them when I say:

I’m just glad I had time to put my pants on first.

That said, here’s the fruit of my labors. I promise it’s the closest reference to any fruit you’ll see in this video…

(Next Wednesday, June 29, I’ll post the Boxed Set Special Edition of The Nedinator, which will include a special Making of the movie’s biggest (and only) special effect video, behind-the-scenes movie stills, an 30-second version of the movie, movie trailers, unusable 3D glasses and more! Unless James Cameron here’s about this first…)

33 thoughts on “A year ago today: Officially the strangest 15 minutes of my life”