As I mentioned on Friday, I was going to be dressing up as Marilyn Monroe on Saturday. Believe it or not, that’s not usually a part of my weekend “to-do” list:

Give dogs a bath.

Wear high heels and a dress.

However, somehow I got talked into participating in the “Mr. Relay” fundraiser event at our local Relay for Life cancer walk. Given that it was called “Mr. Relay,” I assumed there would be some manliness involved. Maybe some feats of strength. Or a swimsuit competition. Fortunately for me, neither of those were involved because, hey — how embarrassing would THAT be! Haha!

Instead, we were asked to dress as our favorite female movie star or character.

Which isn’t to say there wasn’t manliness involved. Trust me, it takes a real man to dance on stage wearing 3-inch heels and then walk laps around the track. It also takes a real man to shop alone in the women’s shoes section at Goodwill, looking for size 13 heels. While I was trying on a pair, I noticed a woman with a small cart staring at me.

“I bet it is,” she said and walked away.

It also required some manly-type planning in order to execute a true re-enactment of Marilyn’s famous pose, complete with wind blowing up my dress. The trick, of course, was how to do it while maintaining the feminine, sexually charged allure of that legendary moment.

My original intention was to simply stride out and then stand over it. Unfortunately, there wasn’t quite enough lift…

So on our next go-round, I took matters into my own hands. Or between my knees, actually…

Unfortunately (fortunately?), there’s no video of this straddling action, which I’d like to point out — again — isn’t easy in heels. 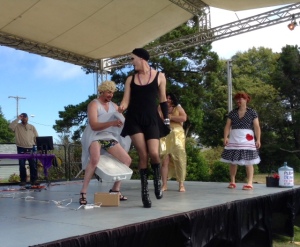 Joining me were three other manly men, Chris (Lucille Ball), Kayle (Cleopatra) and Sean (Glorious), who as you can see was nice enough to cover me when my Marvel Avengers boxer briefs began to show. 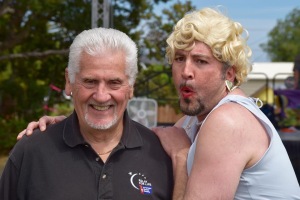 I’m pretty sure he’ll be using this on his re-election campaign poster.

I’m happy to say that, between the four of us, we were able to raise nearly $4,000 for the American Cancer Society. On the other hand, we also caused dozens of people to lose their sight… 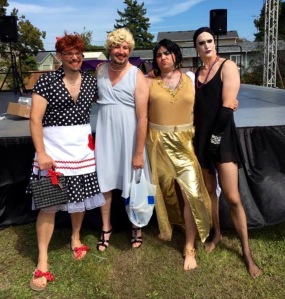 I want to give a special thanks to Kayle Horton (Cleopatra) for organizing the Mr. Relay event and inviting us all to be a part of it. Also, congrats to Chris Saltmarsh (Lucy) for raising nearly $2,000 and being named Mr. Relay — a title I am sure will give him a lot of respect around the house. And I have to say, it’s always fun to share the stage with Sean Sisson, a talented and incredibly creative young man who has a terrific heart under that shaved chest.

Thanks also to my friend Jennifer Connor, who provided the wig and stitched the dress overnight so others would be spared an even shorter dress.

57 thoughts on “Who wore it better? (Don’t bother answering that)”