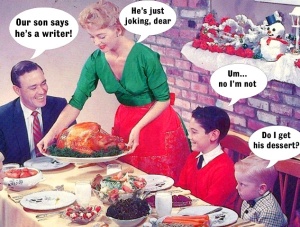 (Today at Siuslaw News, we are short-staffed and on early deadlines, with many of us suffering the lingering effects of tryptophan and alcohol. The result is an extremely small staff of tired, hungover reporters trying to put out today’s edition. Being that I am the tallest and least hungover, I am suddenly an integral part of assuring today’s success — which is a stark contrast to the role I normally play in the newsroom. What does this all mean? For those who recognized the title of this week’s Nickel’s Worth on Writing, you already know it’s a repeat from a year ago regarding what it means to be a writer. For those who never read this post or, for reasons of their own, blocked the experience from their minds, this will be new to you. In either case, whether reading this for the first time, a second time or angrily throwing your coffee at the monitor and sending me the bill, always be proud to be a writer…)

It began with my parents of course, who held hands as I explained that I had always felt “different,” and that I wanted to embrace who I was, without shame, hopefully with their acceptance and approval. They both exchanged glances, my mother squeezing my father’s hand and offering him a worried smile before turning back to me. She knew what was coming and slowly blinked, nodding her head ever so slightly, encouraging me.

I cleared my throat. Took a deep breath.

It’s been many years since I came out of the closet. Or, in my case, the laundry room, which is where I did most of my writing until becoming a columnist in 1998. But before that — before I actually started getting paid to write — that conversation replayed itself many times over the years with family, friends and co-workers, most of whom thought of my writing as something akin to collecting salt and pepper shakers; a “unique” hobby that I was asked not to talk about at parties.

“Don’t take this the wrong way, but for people who don’t know you — it makes them uncomfortable when your eyes light up like that.”

The bottom line is that no one took my writing seriously (And, yes, I realize the irony of that statement considering I am a humor columnist, but still…). In retrospect, there were many reasons why my wanting to be a writer was perceived as a bucket list item instead of a legitimate rung on my life ladder — beginning with my own perception of “wanting to be” a writer. Because we’re conditioned from an early age to view money as a prime indicator of success and achievement, we naturally use that same measuring stick as validation when it comes to pursuits that don’t fall into traditional categories.

In short: If you aren’t getting paid for it, then you’re not legitimate.

That’s like saying you can’t include “skydiving instructor” among the achievements in your obituary just because your parachute didn’t open the last time you jumped. Even if you’ve landed flat on your face in terms of monetary or publishing success with your writing, it doesn’t mean you aren’t a writer.

It just means there’s a good possibility that every publisher you’ve submitted your work to was a skydiving instructor who died before they could read your masterpiece. I honestly can’t tell you how many publishers plunged to their death before I saw my first words in print.

Regardless, if you spend time formulating words for the sheer enjoyment while, at the same time, agonizing over those very same words, congratulations:

You are a writer.

How do I know this? Because no one who isn’t a writer would put themselves through this process. Ask the average person on the street to write five paragraphs about their favorite memory while holding them at gun point, and most will help you squeeze the trigger. The ones who don’t?

Or masochists. Which I realize is redundant.

My point is the only legitimacy you need as a writer comes from yourself — and it starts with believing what you do is important and has value that isn’t measured in dollars or even common sense in the eyes of others. Let’s face it, toiling alone over the choice and arrangement of words on a page doesn’t make much sense to anyone who isn’t a writer. They may nod their heads and smile when you try to explain it, but in their minds they’re wondering if buying a home so close to high-voltage power lines was a mistake. Again, the only thing that matters is giving yourself permission to take your writing seriously.

And by “serious,” I don’t just mean getting published or paid for the words you write. It simply means serious enough that you make time for it, in the same way you do other routines that are important to your daily life. As I said in an earlier column about the importance of establishing a writing routine, when I turned 40 I was suddenly a single father with two children under age 10. As anyone with children knows, there’s always something more important that needs to be done. One night while sitting in my study/laundry room, I realized two things in exactly this order:

1) I needed to establish a writing routine that fit the demands of my new lifestyle, and
2) By putting my daughter’s favorite sweater through the dryer, it was now the perfect size for our neighbor’s Chihuahua.

I couldn’t do much about the sweater, which she’s still bitter about seven years later. But the first thing — establishing a set routine for my writing — became a priority and it should be for you, too. Married or single, with or without kids, stay-at-home or away-at-work parent, full- or part-time job, setting a writing routine says to yourself and others that your writing is just as important as other responsibilities you have. Whether it’s 30 minutes or three hours, every day or certain days of the week, making that commitment to yourself as writer — to write without exception, excuse or apology — is something you owe to yourself as a writer. No one objects to your making dinner, doing laundry, ironing or picking up the kids after practice, and your writing routine shouldn’t be any different.

If you take your writing seriously, so will others.

And if they don’t? It doesn’t make you any less a writer. Published or unpublished, novelist or columnist, fiction or non-fiction, accept yourself for being a writer and always make time for putting those words down on paper. It is both a gift and a responsibility, and a pursuit that is uniquely your own to determine and discover. Make it part of your lifestyle and treasure those who embrace it with you.

For everyone else? I hear that skydiving makes a great holiday gift.