The Door (of Shame, Blame and Brilliance): Sentinel of journalistic history and guardian of our commode since 1971.

There’s no need to rub your eyes or splash cold water on your face! And you, the one banging your head with a ream of copy paper: Stop that.

What you’re seeing is REAL.

That truly is The Door (of Shame, Blame and Brilliance), which is the most important door in our two-door newsroom. Not just because it leads to the commode, but also because it displays the best and worst examples of print journalism clipped and taped there by reporters at Siuslaw News since the 1970s. We like to think of The Door as the Smithsonian of journalistic history, except with the occasional sound of flushing. As I mentioned a couple of months ago when I closed The Door after it’s year-long run as a weekly feature here, I would re-open it under the following conditions:

1) A new example of print journalism Shame, Blame or Brilliance has been deemed worthy of inclusion

2) Our delivery guy, “Joe,” hasn’t used the commode in at least two days

As you’ve probably guessed by now, each of these incredibly strict criteria has been met! (And if you haven’t guessed that by now, a position in Walmart security is waiting for you.) What this means is that we will be participating in an extremely rare induction ceremony for The Door, which hasn’t occurred since running out of glue sticks and adhesives in the mid 1980s.

BUT THAT’S NOT ALL! We actually have two examples of print media history to include on The Door, which has arguably become recognized around the world as a “journalistic Mecca” of sorts — or what Barbara Walters once called “Weewy Impwessive.”

In keeping with tradition, before we reveal our two latest additions, let us join hands and, in a monotoned voice similar to anyone describing Beyonce’s new album, repeat the following:

Okay, you can let go now; sorry my hands were sweaty.

Our first entry comes from Newport News-Times, which is a newspaper here along the Oregon coast where, apparently, mixed media art means something else entirely…

I know this is the Northwest, but if this pubic spawning includes salmon, I may never eat fish again…

I’m not sure if it was intentional, but this article doesn’t talk as much about Sam Briseno’s art as it does about it’s enormous size.

Speaking of which, before our next entry, I should begin by saying everyone makes mistakes — even ME. No, it’s TRUE! (Next time, please try to act more surprised.) For this reason, I am submitting a photo that recently appeared here in Siuslaw News, on a page I worked on. 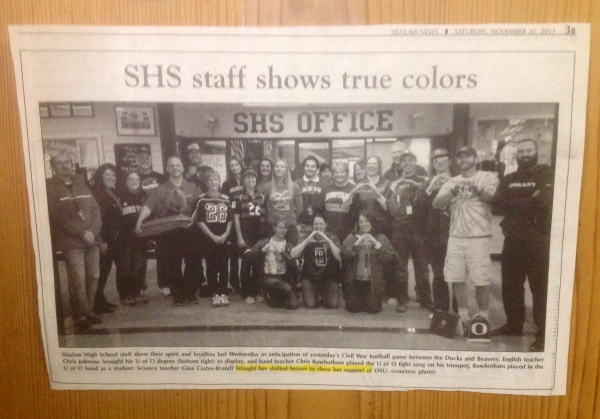 Teachers showing their support for The University of Oregon Ducks and Oregon State University Beavers. Yes, those really are our team names…

Seems innocent enough, right? I mean except for the women kneeling in the front row making the Oregon “O” in front of their mouths. If you were thinking anything else, shame on you… but it gets worse. You should probably know that the mascots for our two local college teams are the Ducks and Beavers. Wait, it still gets worse…

In my defense, the photo and cutline were submitted to us. However, given my years of journalistic experience, and factoring in a natural thought process my wife has referred to as “naughty,” I really should have caught that before it went to print.

Not to say that I would’ve changed…

(Ned Hickson is a syndicated columnist with News Media Corporation. His first book, Humor at the Speed of Life, is available here from Port Hole Publications.)

33 thoughts on “Hold on to that knob! It’s time to revisit The Door in our newsroom”