I know it’s been a while since any of us have seen The Master of Horror© Stephen King, so I’d like to start this week’s edition of The Box by clarifying that IS NOT Stephen King to the left. That’s because…

HE’S RIGHT BEHIND YOU! AAAAAH!

Haha! Just kidding! That’s just “Skippy” the rabid, blindfolded squirrel. WAIT! Not behind you — I mean to the left! Oh man! As you can see, even just talking about the The Master of Horror© Stephen King can put people on edge. So you can imagine my shock finding him among the hundreds of unclaimed and unidentified photos that have been piled into The Box in our newsroom since the 1980s. Regular readers of this weekly feature know I normally dump the contents of The Box onto the floor of our newsroom and randomly choose a photo. This is achieved through a technical four-step selection process:

Step 1) Wait until my fellow reporters are deep in thought (asleep) thinking about important news stories
Step 2) Suddenly and without warning yell “RELEASE THE SQUIRREL!” and let “Skippy” loose in the newsroom.
Step 3) Select the photo closest to the first person who screams.
Step 4) Get yelled at by my editor

I then utilize my years of investigative journalism experience to identify the individuals and circumstances within the photo. Past discoveries have included: the very first Jesus photo bomb, a senior citizen Viagra smuggling ring, and evidence that aliens not only exist but have a terrible fashion sense.

However, this week is different. Not just because the date isn’t the same (See? The mind of an investigative journalist never stops), but also because, unlike most photos in The Box, the identity of this week’s image is painfully obvious…

Who knew The Master of Horror© Stephen King had a musical side?

It doesn’t take someone with 15 years of investigative journalism experience to immediately assume 1) this is The Master of Horror© Stephen King, and 2) he apparently had a brief career as a musical performer. That said, because of my extensive journalistic background, you can rest assured that my unfounded assumptions are indeed correct.

Whatever you call it, I’m willing to stake my reputation as a Pulitzer-winning journalist on this assumption. So keep that in mind if I ever win one.

Now that we have positively established this is a photo of The Master of Horror© Stephen King during his early musical career, we are left with three puzzling questions:

1) What type of music was he singing?
2) Why did he stop?
3) Will he or one of his attorneys read this and take my 2002 Dodge Neon as part of my court settlement?

Once again, I turned to our vast Siuslaw News archives in hopes of tracking down more information… 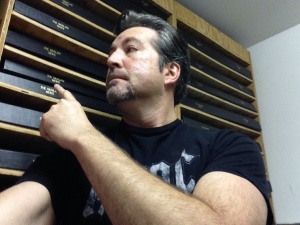 In the “morgue,” pointing dramatically in an effort to add poignancy.

As it turns out, The Master of Horror© Stephen King’s extremely brief musical tour as a singer of children’s songs began and ended right here in Florence, Ore., on Oct. 31, 1984, when he attempted to perform a few songs from his debut album, Lullabies From the Guy In Your Closet.

From the reports I gathered, the short concert was held in the elementary school gym, where the lights were dimmed and kindergarteners cozied with blankets as he opened with: Cujo Was His Name-O. The song was quickly stopped by kindergarten teachers, long before the chorus, when he began singing, Once a farmer shot his dog and Cujo was his Name-O…

The Master of Horror© Stephen King then moved on to another song from his album, The Bloody Wheels on Christine Go Round and Round, which also came to an abrupt end. After a long, awkward silence that principal Bill Schlependorf described as “like dead air on the radio, except for children whimpering,” The Master of Horror© Stephen King launched into what became his final song attempt, There Once Was an Old Lady Who Swallowed Her Twin.

Sadly for The Master of Horror© Stephen King, his dream of being a singer of children’s songs ended there. But according to a follow up story headlined Class of 1996 Still Receiving Group Therapy, the nightmare lives on.