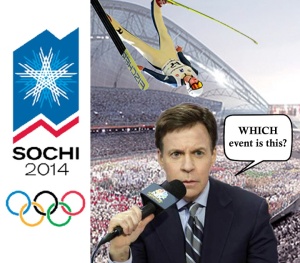 As many of you know, every two years I try to convince my editor to send me to the Olympics. The closest I’ve come was during the winter Olympics in Utah, when I was offered gas money, thermal underwear and a set of binoculars for watching the events “from a great spot on the third floor of a car garage not far from the Olympic Pavilion — or thereabouts.”

This year is no different. Especially when you consider the games are taking place in Sochi, Russia, which means there’s no way I’m going to see anything from any car garage in Utah. However, it doesn’t mean we won’t be offering you the same in-depth coverage as the larger media outlets. It’s just that ours won’t include any photographs, scores, statistics, biographies or interviews with Olympians, unless you count Mr. Knowitall, our vending machine repair guy, who won the Brickerville High School “Donkey Basketball Olympics” in 1987.

(To be honest, that interview is still sketchy. The last time I asked him about “riding a donkey for the gold” he threw a Diet Sprite at me.)

While it’s true we won’t have anyone at the Olympic Games again this year, it doesn’t mean we weren’t able to come up with something just as exciting and informative, especially when you compare it to, say…

Staring at a grapefruit.

Keeping that in mind, I’m proud to announce an in-depth look at all 20 Winter Olympic events in a special three-part series we’re calling:

20 Reasons to be a Summer Olympian

We will begin with The Slalom: First introduced by Germany in 1936, this event combines the speed and skill of downhill skiing with the bravery one attains from consuming large quantities of German beer. Athletes launch themselves down slopes and attain speeds of up to 120 km per hour (approximately the speed of sound) while navigating around flags, moguls, photographers, journalists, border patrols, assorted swimmers and cabana boys before crossing the finish line somewhere in Peru. Events also include the “Super-G,” which combines the thrill of slalom with the danger of rap artists on skis.

Next, an event dating back to 1932 when a Swedish marksman was driven into a snow bank by a hot-dogging American skier, The Biathlon combines cross-country skiing and long-range target shooting. Endurance is the key factor as competitors race around long loops of varying lengths, stopping only occasionally to shoot at targets until, eventually, firing five shots from a seated position inside of a portable commode.

Since 1924, The Bobsleigh has been thrilling Olympic spectators with its combination of speed, technique and general lack of a steering mechanism. In both the two-man and four-man events, each athlete has a specific purpose. This begins by getting the sleigh off to as fast a start as possible before piling inside the chassis, where athletes contribute individually by grabbing their ankles and saying the Rosary. Once they cross the finish line, the brakeman goes to work by pulling on a handle that, for all intents and purposes, does absolutely nothing.

There you have it, our first installment of pre-Winter Olympic coverage! Join us next Tuesday for a look at Curling, Figure Skating, and several other exciting events, none of which can be seen from Utah…

47 thoughts on “Winter Olympics preview! (Or 20 reasons to be a summer Olympian)”