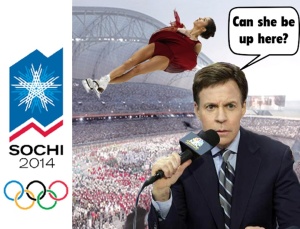 Hello and welcome to another exciting installment of our exclusive 2014 Winter Olympics preview:

20 Reasons to Be a Summer Olympian

It’s a preview so exclusive even the Olympic Committee doesn’t know about it. And, quite frankly, we’d like to keep it that way. That’s because while the larger media outlets routinely get bogged down with boring interviews and analysis of things like the effect of wind trajectory on Bob Costas’ hair, we are able to avoid all that. How? By going nowhere near the actual Olympic games! This allows us to provide you with valuable information that news sources in Sochi, Russia are missing because they’re too busy trying to keep their Babushkas from freezing off.

Last week, we began our special preview with an in-depth look at the Slalom, Bobsleigh and Biathlon events. For those who missed it, here’s a quick re-cap: Athletes who compete in the Slalom and Bobsleigh are insane, and though Biathlon sounds exciting, we challenge you to watch it without drooling on your arm.

OK, now that we’re all caught up, we can begin this week’s installment of our special Olympic coverage by taking a look at Cross Country Skiing — which is even less exciting than the Biathlon since there’s no shooting involved. (At least in the Biathlon you are occasionally awakened by gunfire.) In cross country skiing the only sound is the commentator, who is trying to keep himself awake by finding exciting words to describe what appears to be several people looking for the nearest ski lift.

Which isn’t to say there isn’t plenty of excitement at the Winter Olympics. In fact, when it comes to Curling, the longer you watch four people moving a large stone across the ice using nothing but brooms, the more exciting cross country skiing gets. For those of you who are unfamiliar with the sport of Curling, this competition became an official Olympic event 15 years ago as a replacement for Ice Bowling, which [Pause here for dramatic effect] fell through at the last minute!

In Curling, each team consists of four players: the Lead, who delivers the stone; the Second and Third, who sweep the ice; and the Skip, who calls out important strategy like “Sweep faster!” and “Do you think anyone’s still watching?!” This continues until one team is able to place its stone closest to the center of a special target marked on the ice. Or until Bud Light pulls its corporate sponsorship.

Next we have Figure Skating, which gets its name from the Ukrainian phrase Ukrlegnz Kgronzmof Itzentofl, meaning “Cold ankle twist.” Figure skating combines music with complex skating routines that include a series of required elements, such as the “salchow,” “double axle,” and the dreaded “triple latte.”

This brings us to Freestyle Skiing, in which skiers perform jumps, flips and other thrilling acrobatic maneuvers, just like I do, except that they don’t land on their heads. Continuing along that theme, we will end today’s installment of our three-part Winter Olympic preview with the Nordic Combined, which, as you might expect, combines skiing and large hairy men in horned helmets.

That’s what you’d expect, but you would be wrong.

It actually combines the acrobatics of freestyle skiing (jumping and high speeds ) with the stamina of cross country skiing (yawn), effectively re-creating how Nordic men returned home from pubs some 200 years ago.

Return next week when we continue our special preview with a look at Luge, Skeleton and other Olympic events whose athletes are routinely denied medical coverage.

45 thoughts on “Like speed skating, our Olympic preview continues because we can’t stop”