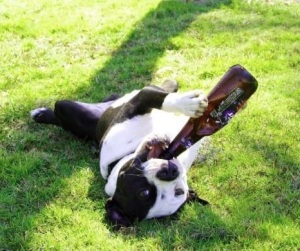 As you might expect, since writing about Japan’s new line of wines made specifically for cats a couple of weeks ago, I have received dozens of emails from unhappy readers denouncing what they believe is blatant discrimination against members of the canine population. All of them feel wine for cats is a really bad idea that will only increase the air of superiority cats already have. Coincidentally, most of these emails arrived through my “Fetch” account.

Here are just a few examples:

If I hear Mittens talk about the ‘rich bouquet’ of her stupid wine one more time, I’m leaving something with rich bouquet in her cat dish.”
— Buford

My sense of smell is 100 times greater than my owner’s. She doesn’t have to smell Mr. Whiskers’ horrible wine breath. Well, I DO! Then she gets MAD when I barf on the carpet.” — Fifi

They say for every action there is an equal and opposite reaction, meaning that for every cat sipping a glass of wine there is a dog lapping up a special libation. And not just from the toilet. As it turns out, dogs have had Bowser Beer available to them since 2012, long before “Mr. Frisky” ever thought of getting stemware, comparing tannins or going out and spraying the town. In the same way cat wine is made specifically for a cat’s discriminating taste, the makers of Bowser Beer have created a flavor profile that compliments a dog’s natural pallet — meaning the only thing that isn’t in the brew is an actual shipping pallet.

Ok, so that’s not entirely accurate. It’s made mostly of chicken broth and malt barley — flavors that dogs find intoxicating. Which is good because (and don’t tell dogs this) there’s no actual alcohol content in Bowser Beer. Not that it matters; as we all know, dogs are big hams who can easily be mistaken for being intoxicated anyway. Especially if there’s a treat involved. The same can be said for most men actually, which could explain why we are best friends. The truth is, I have been known to run circles in anticipation of bacon. I am not ashamed to admit this. Although tripping over our dog, who was running circles in the opposite direction, isn’t something I often bring up in conversation.

I’m sure just like me, many of you were unaware dogs had their own beer. I think it’s because, unlike cats, dogs generally don’t make a big deal out of things. Table scraps, dry kibble or sirloin steak, dogs are equally happy and appreciative. Give them their own beer and they take it in stride. Without fanfare. No frills. Pop the cap and enjoy.

Having their own wine meant involving a foreign country. Import fees. A press agent and translators. Removing the cork and letting it breathe first because, hey: We’re not animals for God’s sake.

In the end, the fact that dogs are beer drinkers and cats are wine drinkers illustrates a fundamental difference between them. For the most part, those who drink beer may have their preferences, but won’t let beer snobbery get in the way of having a cold one if it’s offered. Dogs are the same way; if it’s handed to them, they’ll consume it. Unless it’s vegetables. And who can blame them.

Cats, on the other hand, will purposely eat something they hate just so they can throw it up in your shoes.

As I’ve mentioned before, we have a cat and two dogs in our home. I can tell you we have no intention of introducing either cat wine OR dog beer into what is already a delicate balance of power between our pets similar to The Cold War — something that would escalate the moment we allowed our dogs to open a cold one.

Should that happen, I don’t even want to think of what the cat would leave in my shoes.

Especially if she’s had too much cat wine.