Hold on a second. Sorry, the cat walked across the keyboard.

I mean, 200 other people, then you probably already know our “Dempublican Campaign” submission won this week’s round in the “Performance of the Year” competition at The Public Blogger — Ranking me back at No. 1 as we head into Round 8 this Sunday.

However, if you don’t follow me on Facebook along with 200,000,000 others (no cat this time), then you probably haven’t slept all night because you’ve been writhing with anticipation! If there’s any other kind of writhing involved from last night, please keep it to yourself.

In the meantime, here’s the result of my collaboration with humorist and Huffington Post contributor Stephanie Lewis, and 7th Born Productions recording artist Kendrick Merk Nichelson. The rules of this round were simple: No rules, other than creating a true collaboration that blends the individual contributions from each artist into a seamless piece. I honestly couldn’t have asked for a better pair of collaborators for this project. And even if I had, I’m pretty sure Kendrick could kick my @#$.

That said, once again I want to thank All of You for your continued support and encouragement in this competition. This week was particularly tough; your emails and comments have meant a lot and inspired me during a week that included the tragic death of a very special person, as well as coming on the heels of dropping to No. 2 for the first time in this competition. As  I said, it wasn’t an easy week — but you helped make it better.

Thank You so much for that.

Alright, enough! This is a humor blog!

Time to get funny. In case you missed it, here’s what won this week’s round of competition at last night’s “A Star is Born: Round 8…”

WASHINGTON, DC — In a move that analysts are calling “the most shocking political development since the last time Donald Trump was allowed near an open mic,” the political landscape for the 2016 presidential race has suddenly broadened with the announcement of a new political party. Known as The Dempublicans, the party has already endorsed humorists Ned Hickson and Stephanie Lewis as runningmates in a bid for the Oval Office.

“I never would have considered running for the presidency,” says Hickson. “Then I found out there was no actual running involved, so I thought ‘why not?’ Besides, since Stephanie, Kendrick Merk Nichelson and I are the only members of the party, it really streamlined the nomination process — and I believe that’s the kind of efficiency the American people are looking for.”

With as much as 68 percent of Americans feeling disappointed in their options for the 2016 elections, The Dempublicans are confident that their slogan, “The World is a Funny Place: Elect the Team with Experience,” will ring true with many Americans. In fact, the fledgling political party has already received a groundswell of support after Lewis, speaking during an impromptu rally at her local DMV, demanded an end to what she called “Tea Party” politics.

“It’s time to get things done, and in Washington that means Cocktail Party politics” she shouted to an enthusiastic crowd of 48 people, adding, “Hey, I’M number 48! Gotta go!”

Hickson and Lewis say their platform is built on addressing the problems none of the other candidates are willing to talk about.

“Sure, everyone wants to talk about the economy, terrorism, health care, blah, blah, blah,” says Hickson. “We need to look at the bigger issues we’re facing in our nation and around the world. Like running out of chocolate by 2030. Do you think the economy or terrorism is going to matter when 50 million women on PMS all run out of chocolate?” 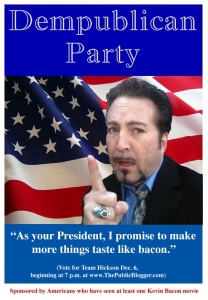 Lewis adds that the growing anti-Muslim sentiment in the U.S. is misplaced and would be better served directed at a threat that enters our borders and sweeps across the nation every day. “As a member of Americans Battling the Sun’s Unreported Ray Disasters (ABSURD), I recently flew into Miami and accidentally grabbed George Hamilton thinking he was part of my leather luggage. You don’t forget something like that. When it comes to threats entering our border, we need to take a long hard look at the sun. But not DIRECTLY!”

The Dempublicans are also breaking new ground by creating a new position called the Minister of Hip-Hop which Nichelson, a 7th Born Productions recording artist, will fill for the Hickson-Lewis presidential ticket.

“I’m sick of ‘Hail to the Chief,'” says Hickson. “We need a presidential theme song we can all groove to. That’s the kind of thing that’s going to unite our country. So I guess what I’m saying is, if I’m elected president, we’re going to need bigger woofers in The White House.”

When asked what’s next on the Dempublican Party campaign trail, Lewis suddenly looks to Hickson with concern.

“I thought you said ‘champagne trail,'” she remarks. “If I’d known that, I would’ve worn something other than these spiky heels.”

In the meantime, the new political force has just released its first promotional video, which outlines the Dempublican Party platform, as well as its presidential campaign strategy for the November 2016 elections…

28 thoughts on “In case you missed it, I was elected President last night. Sort of…”