As most parents will tell you, every child goes through a stage where they seem to suffer from oppositional disorder, fervently opposing even the slightest difference of opinion as if the future of the world depended on it.

Although I can’t confirm it, I’m pretty sure humanity will survive no matter who sang “Shameless” first.

Whether it’s the “terrible twos” or teens (or both, Lord help you) it’s part of a necessary step toward independence and establishing personal perspective on the road to maturity.

Opposition for sake the of opposition only limits our opportunities, our perspectives and the kind of understanding that helps us grow as
individuals.

Maturity happens with the recognition of this fundamental truth.  END_OF_DOCUMENT_TOKEN_TO_BE_REPLACED

Each year, our nation sets aside days in remembrance of events we deem important to remember as Americans.

We do this to ensure we will always remember the individuals, moments and historic events that helped shape our nation and the world around us — whether it be to celebrate when we got things right or to learn from the lessons of getting it wrong. Martin Luther King Jr. Day, Pearl Harbor Day, Memorial Day, Veterans Day, July Fourth — taking time to remember these days and other days like them assures that we never forget who we are and, more importantly, how we got here.

To deliver a speech on Memorial Day without mentioning the ultimate sacrifice paid by our veterans would be the first step in diluting the memory of the terrible cost of war and those who paid the price.  END_OF_DOCUMENT_TOKEN_TO_BE_REPLACED 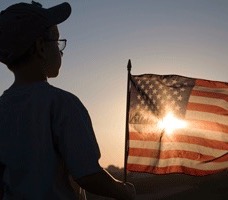 Before putting the final touches on today’s edition of Siuslaw News, we did something we haven’t done in eight years. At the bottom of our Opinion page is a small section with the heading “Where to Write.” In it are the addresses of our representatives at the county, state and federal levels.

At the top of this list is our nation’s President, which has now been updated to reflect today’s inauguration of Donald J. Trump.

The peaceful transition of government has now officially been achieved for the 45th time since George Washington took the first — and very same — Oath of Office some 227 years ago. At the time, Washington remarked it wasn’t his inauguration that was important but the second inauguration that would be the most significant. He recognized one of the first and most important tests of Democracy would be the peaceful transition of power — something that had never been achieved in human history in such a way or on as grand a scale.

Eight years later, when Washington handed over the presidency to the newly-elected John Adams in 1797, it was more than a notion; it was a reality. But more importantly, it was an example of how a nation of people could participate in a process of discussion, debate and even disagreement but still emerge unified as Americans thanks to a shared belief in our nation’s Constitution and what it represents.  END_OF_DOCUMENT_TOKEN_TO_BE_REPLACED

After becoming editor here at Siuslaw News in September, I began writing an Opinion piece a few times a month called “From the Editor’s Desk.” It had been several years since our newspaper had a regular opinion piece written by its editor. Being that most of our readers knew me only as a humor columnist, I felt it was an opportunity to show a different side and, hopefully, connect with the community in a different way.

I also saw it as a way to build an ongoing dialogue with our readers so that they don’t just read the newspaper, but feel like they are a part of it. The response has been terrific and, over the last several weeks, our Opinion page has become a lively, respectful exchange of viewpoints and insights.

If only I could say the same about this year’s election.  END_OF_DOCUMENT_TOKEN_TO_BE_REPLACED 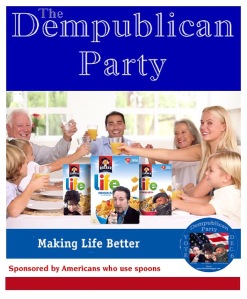 Even though our Dempublican Party Convention was purposely held after the RNC but before the DNC, on Saturday afternoon, between 1:30 and 2:15 p.m., in the seating area of the Fred Meyer deli, it was still somehow overlooked by the media!

Although I’m pretty sure someone was live-streaming us on Facebook with their iPod.

As they walked by, grocery shopping with their infant.

Anyway, now that the conventions are over, some of you may still be undecided about who to vote for this November. Or, like a lot of Americans, you feel as though you’re not voting FOR someone as much as you are voting against someone else?

Is THAT what our forefathers had in mind when they took the risk of gathering together in secret to get drunk at Christiana Campbell’s Tavern and write the Declaration of Independence?!?

I don’t think so!

And did our forefathers like bacon? Yes! (If they still had their teeth). So, if YOU like bacon, and THEY liked bacon, then the Dempublican Party is YOUR party because bacon is a huge part of our platform! In fact, we tried to make a speaking platform out of actual bacon but, well…

We ate most of it.  END_OF_DOCUMENT_TOKEN_TO_BE_REPLACED

Freedom of the Press:

The right of the press to circulate information and opinion without censorship by the government.

While watching coverage of this week’s Republican National Convention, I switched between CNN, ABC, FOX-News, CBS and others. I read news articles online and in print, and watched live streaming from different sources online.

And I was struck by how one event could be seen so differently by so many news organizations — nearly all of which had a clear slant, whether for or against.

Our founding fathers made Freedom of the Press part of the Constitution’s First Amendment because, in the words of its principle author James Madison:

And because I’m a journalist, you can trust me on that.

END_OF_DOCUMENT_TOKEN_TO_BE_REPLACED

I generally reserve this place for humor. That’s because I believe in the power of its shared experience, and how that experience brings people together. Good humor transcends color, religion, geography, financial status or political affiliation. It’s devoid of hate and allows us to embrace a common thread woven through our humanity that we all share through laughter.

All living creatures get angry, scared, excited or worried; it’s humor that makes us human.

But there are mornings like this when being funny doesn’t feel right. The events of the past few days have spilled over from a collective cup that has been filling with a bitter brew being served during a time of unprecedented polarization within our country. We are being divided and conquered by fear — of each other, our differences, and a political landscape that inspires the worst in us instead of what defines us at our best.

This week’s shootings in Louisiana, Minnessota and Dallas — like Orlando — are about the kind of fear that breeds mistrust and hatred. It’s also the kind of fear that is fast becoming the oxygen within the current political atmosphere. The more of it we breathe, the more it permeates us, coursing through our life blood and into our hearts until that fear we breathe is what sustains us.  END_OF_DOCUMENT_TOKEN_TO_BE_REPLACED

(I’m a guest at Open Thought Vortex Magazine today, proposing the creation of a Presidential Aptitude Test for future elections. Unfortunately, it’s too late for this one…)

If I’m being honest, I have about as much enthusiasm for our choices in presidential candidates as I do for licking a 9-volt battery; I know the result won’t kill me but the anticipation itself is enough to make my tongue curl — because I know it’s still going to sting. As I’ve watched the process of elimination over the last several months, I can’t help but wonder how, with a population of more than 324 million, this is the best we have to offer? Maybe we forgot some people somewhere?

Like Rhode Island. It’s small and easy to overlook.

It also got me wondering why becoming a presidential nominee isn’t harder. Don’t get me wrong, I realize not just any millionaire can become a presidential candidate. But in a country where you have to pass a background check and psychological interview before landing a job at McDonald’s, you’d think we’d at least require the same of someone vying for a position as the Most Powerful Person in the World. It seems like we might even feel obligated to other nations to make sure the Commander-in-Chief of the planet’s most advanced military doesn’t have mommy or daddy issues, an axe to grind, isn’t a power tripper and has a working knowledge of international affairs that extends beyond Fox News. (Read more at OTV Magazine)