Every Saturday morning, I and the rest of the staff over at Long Awkward Pause take turns chiming in on The Saturday Six, which is a series of (Warning: spoiler alert!) six related items that should probably be destroyed after reading. This week’s list asks: What if ad slogans had to be truthful? 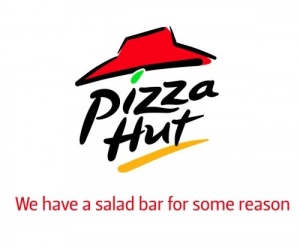 Chris: The BBQ pizza scares me…what is that meat they use? Is it even legal?

Katie: Another alternative: “People eat here for some reason (and that reason is because they hate themselves).”

Ned: Can’t find what you’re looking for on our salad bar? Try the sneeze guard!

As you may have heard, Carl’s Jr.’s recent commercials are raising quite a flap among chicken advocates. As you may not have heard, there really is a group of people who work full-time advocating for the rights of chickens (Though, as far as I can tell, not a single member of this group is, indeed, an actual chicken.)

The ad in question is the one that shows a group of scientists examining a live hen as they search for its “nuggets,” which, for me at least, helped explain a few things about my last doctor’s visit. But members of United Poultry Concerns — a chicken advocacy group based in Virginia — don’t see it that way, and want to have the commercial pulled because they say the mock examination “caused the chicken undue stress.”

In a statement given to the Los Angeles Times, UPC president Karen Davis was quoted as saying, “There’s no question that the bright lights of filming, in combination with the numerous takes, would make the experience stressful for the chicken.”

Considering that the chicken in that commercial was at least alive and flapping, one can only imagine how stressed-out a chicken must get when told it’s going to be in a commercial for KFC. END_OF_DOCUMENT_TOKEN_TO_BE_REPLACED

You may find it hard to believe, but I’m not a fashion icon. No, really — it’s true. Unless it includes denim and lace-up boots, I rarely wear it. So it should come as no surprise I wasn’t aware that Old Navy and The Gap joined forces in 2011. Why wasn’t I made aware of this?!

In fact, I didn’t care until yesterday, after my wife and daughter returned from an all-day quest for the latest fashion trend: colored jeans. While listing all the places they searched, my wife explained how going to both Old Navy and The Gap was a waste of time since they are basically the same company, offering the same things.

While looking for the last box of Count Chocula cereal, I documented proof that product placement isn’t always what it’s cracked up to be. I don’t think I’ll ever look at cinnamon toast or Mary Lou the same again.